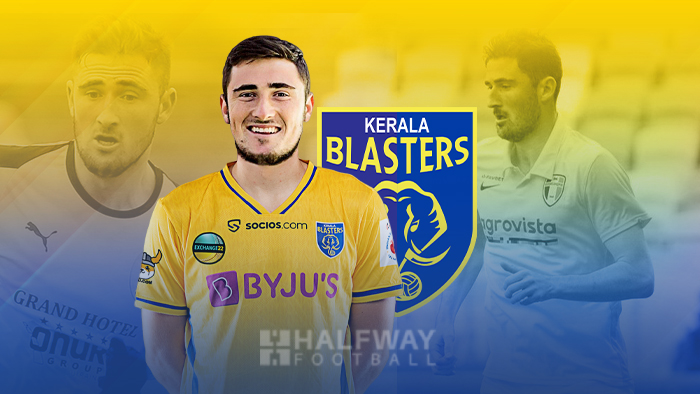 Kharkiv is not only the second biggest city in Ukraine and one of the country’s most important economical and cultural centers, but also the home of FC Metalist Kharkiv, one of the biggest Ukrainian clubs as well as the boyhood club of Kerala Blasters‘ newbie Ivan Kaliuzhnyi.

Founded in 1925 as a team of railway workers, Metalist Kharkiv was usually passed around in the various leagues of the Soviet system until 1978, when the Kharkiv side had their so far best time. Great successes followed, peaking in a domestic cup win in 1988. Afterwards, Metalist was allowed to play in the UEFA Cup Winners’ Cup making it to the last 16. After the Soviet Union was dissolved, Metalist Kharkiv joined the Ukrainian league system. The Kharkiv side would frequently finish at the top of the table and compete internationally. However, following the Ukrainian revolution in 2014, the football clubs’ owner Serhiy Kurchenko left the country, refused to sell the club, salaries weren’t paid anymore resulting in the side to dissolve in 2016. It didn’t take long until the club was refounded – not only one time, but three times. The first of them is Metalist 1925 Kharkiv, the second was Metalist Kharkiv owned by Kurchenko playing in Ukrainian amateur divisions for a couple of seasons. In 2019, another club was founded named FC Metal Kharkiv. In 2021, the side was renamed to Metalist Kharkiv again and adopted the traditional badge, making the side the official successor of Metalist.

Ivan Kaliuzhnyi: From Ukraine to India

Born in Dovzhyk, a small village with around 2500 inhabitants 60km away from Kharkiv, of course, Metalist was the first professional club of young Ivan Kalyuzhnyi after he was discovered playing for amateur side Arsenal Kharkiv. At Metalist he developed into an interesting prospect for the future and made his first games for the U17 of “Zbirna”, the Ukrainian national team. When Ukrainian giants Dynamo Kyiv, the most popular club in Ukraine, knocked on sixteen years old Kaliuzhnyi’s door in 2015, the midfielder left his hometown for the first time for the sake of football. He stayed with the U19 of Dynamo at first and made a couple more appearances for the U17 and U18 of the Ukrainian national team before he was promoted to the second team of the “blue-white”. While he was training with the first team of Dynamo a couple of times and even featured for the side in friendly matches, he was never able to break through. A couple of loans followed for the Ukrainian: the first one home to Kharkiv. He immediately broke into Metalist 1925’s team and gave his professional debut playing 28 times for the 2nd tier side, scoring one goal. However, he returned to Dynamo and another loan followed for Kalyuzhnyi, this time he ended up in the very west of Ukraine as he joined Rukh Lviv. In Lviv, he made the next step of his career as he didn’t only become one of the most important players of his side but also got promoted to the first tier of Ukraine. As a result, he made his Premier Liha debut match for Rukh Lviv before returning to Dynamo Kyiv one last time. As Kalyuzhnyi’s contract run out and both sides decided to not extend the contract, he joined FK Oleksandriya in February of 2021. While he was mostly an unused substitute player in his first half of a season with Oleksandriya, he became one of their key players in the upcoming season, missing only two matches. However, he wasn’t able to finish his so far best season as Russia invaded Ukraine in the February of ‘22 and as a result, football was stopped in the Eastern European country. Luckily, the 24 years old was able to leave the country joining the Icelandic side Keflavik IF for two months before joining the Indian side Kerala Blasters – again on loan.

Despite being a central midfielder, Ivan Kaliuzhnyi is a very defensive-orientated type of player with his biggest strengths being tacklings and interceptions. Paired with his physique, he can turn into a nightmare for many attackers. The Ukrainian is a hard and ruthless defender who isn’t afraid to use his whole body in 1vs1 situations and to receive warnings and bookings. While he is not overly unsportsmanlike and rarely receives red card, he’s likely to see a few more yellow cards in his career. Being 1,89m tall, he is also pretty strong in areal duels, winning most of them. Apart from this, he has a decent vision and is talented when it comes to distributing the ball. He knows where and when he has to play the ball and is able to create chances. The Kharkiv native is known to play a lot of dangerous through balls, but he likes to play short balls too and isn’t afraid to pass a ball into the box or into the last third of the pitch. This way, he is often involved in dangerous situations or even creates them. He is able to play smart and lethal passes before a defender can react and intercept them. Although he rarely shoots on his own, he likes to assist goals and is frequently successful doing this as he assisted 4 goals for his teammates last season. While he still has to work a little bit on his attacking qualities, he is still often successful in dribblings to his decent technique and pace, making him a very versatile kind of player. Kaliuzhnyi’s main weakness seems to be his shooting as his attempts are not always really accurate and he’s not very likely to score, however sometimes he is lucky and sends one past the goalie. All in all, I can say, Ivan Kaliuzhnyi is an incredibly fascinating player with outstanding defensive skills, but he has for sure some interesting attacking abilities as well. As he is only 24, it is likely he will still get better and his development is not over yet.