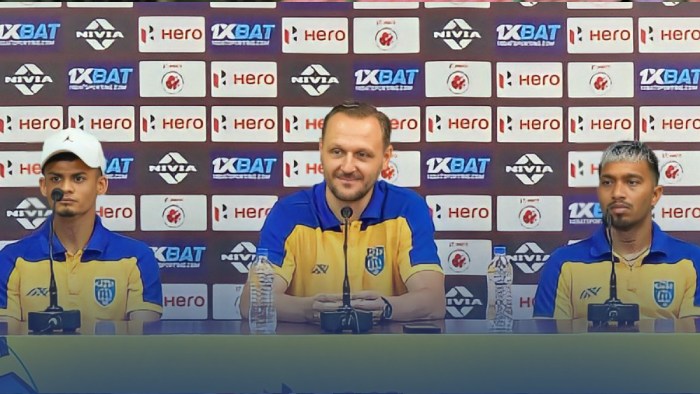 Ahead of their clash against East Bengal FC in the opening fixture of ISL, the pre-match press conference was attended by the Head coach Ivan Vukomanovic, Captain Jessel Carneiro and Sourav Mandal.

Jessel was asked about his thoughts ahead of the new season and the atmosphere in the camp. He responded by saying that everyone is excited to perform in front of the crowd. “Everybody is pumped up for the first match. It’s been 2 years, finally we get to play in front of the crowd and the team is looking very good and balanced. We are pumped up for the first match and want to go out and win.”

He was further asked about how he felt, especially coming back from the injury for which he replied by saying that he feels fit just like how he was before the injury and that everything was going well. He also said that he is looking forward to playing in front of the crowd. “I will give everything for the team”, he added.

The coach was asked about the feeling of playing in front of the fans and whether he had any message to them. “It’s a great feeling to play in front of the fans after so long. Because we play football for the fans. It will be a pleasure and honour to be on ground tomorrow. We are happy with the Pre-Season and everything. So, we are so excited and ready for tomorrow’s game. let’s hope that everything will be alright and let’s hope for the best.”

When asked about his message, he responded that “we would like to see them in huge numbers because it was horrible to play without them last year. This year when we play the game, we will give everything for them.”
He was asked about the objectives of the season. “ISL is a nice competition because of the fact that anybody can beat anybody. Last year, in our case nobody expected us to reach the final. so we proved that in ISL anything is possible. I think it will be quite the same in this year. we will see some surprises & we will see some disappointments. It will be interesting.”

“We proved that in ISL anything is possible. I think it will be quite the same this year. We will see some surprises & we will see some disappointments. It will be interesting.”#KBFCEB #ISL #HalfwayFootball #IndianFootball #KBFC pic.twitter.com/vIIad5VfAb

Kerala Blasters had never had a coach who managed two back to back seasons. He was reminded about this and was asked whether it is a pressure, especially since they reached finals in the previous season. “I think no. You work with a process that you believe in and you work in a project where everyone knows what they have to do. Now we have the consistency and the players have adapted to the work. We have great cooperation between technical and medical staffs and everything is smooth with the management. These things give you confidence and players will feel good and confident. For us, there is no pressure but only pleasure. we are doing something that we love. So, with the positive mindset nice things can happen. We believe in our objectives and we believe in our ideas. We will continue and start our season tomorrow and we will see where it will take us,” he responded.

Ivan was asked about his opponents, East Bengal FC. “East Bengal had a couple of less good seasons. But it was the same case with Kerala blasters last season. After such a dry period you have new ideas and new motivation and then with the changes they had I think they showed in Durand cup that they can be surprising. They have a good coach and a good team and anybody can beat anybody. So we have to be ready for tomorrow.”

The coach was further asked about the foreign departures and arrivals, for which he responded by saying that it happens in football worldwide. Players come in and go out. It’s an unavoidable fact. He reminded that the previous set of foreigners were also questioned when they were announced but they turned out to be the fan favourites by the end of the season. “The new set of foreigners are great human beings and with a positive mindset, they can achieve something nice.” He also added that he is grateful to the former departed foreigners for being with the club in the previous year and doing a great job. He expressed his hopes about the new foreigners.

Ivan was asked about the developmental players in the squad. He expressed his joy and replied that it is one of the objectives of the club. He added that he is very happy with the team.

Ivan was asked about the role of Ivan Kalyuzhnyi in his system. He responded that it gives him new ideas and possibilities and an extra weapon to manage in the game. He further added that Ivan is a young and quality player and has to adapt to the climate and the league. The coach was also asked about injury concerns and about the condition of Sahal, who seemed to pick up a minor injury during a national team match. Ivan replied that there are no injury concerns and the whole squad is available for selection. He added that the technical and medical staff have been doing a great job, ensuring that the players haven’t picked up any injury. There was also a question regarding Dimitrios and Giannou, the foreign strike force of Kerala and whether the fans can expect them to feature in the starting 11 together. Ivan replied with his trademark smile, “We can expect anything tomorrow.”

Jessel was asked about what advice he would like to give to the new players who haven’t played in front of such a huge crowd. “When I played my first match it was obviously same for me as well. I would say, just play your game and be confident. We will be playing with confidence and all the positive energy we have. We will try to win the game and the crowd will be behind you,” he replied.

Saurav was asked about his initial Impressions after signing with the club and his expectations. “Choosing Kerala blasters have been the best decision because it is one of the best team in the country right now. coach is very frank and friendly and supports everyone, especially the youngsters. I hope we will have a good season,” he replied.

“I hope that they come in huge numbers tomorrow and we will make sure they have a good time,” he added.

The coach was asked about his opinion the toughest opponents and he replied that there will be some surprises like every year. “We have to believe in ourself and our quality. We showed last year that we can surprise anybody and with the huge support we have and the positive mindset we can do nice things. But we have to stay humble and we have to work hard. We know who we are and what we can do. Let the season start and then we will see,” Ivan smiled.

Ivan also added that he is happy to see that more Local boys are coming up and performing. lvan also stressed on the importance of having a longer season for the players. He was also asked about the consistency of Indian players and how to ensure that they remain consistent. “Longer season, their commitment to football and taking more responsibility will improve their consistency”, Ivan replied.

lvan was also asked about the refereeing and he reminded the medias that the team had lost a few points to less good decisions in the previous year. But he also added that he believes that they are trying to do their job and these things happen. He talked about certain measures ISL have taken to increase their performances and hopes that it will improve. He ensured all his support.

All in all, KBFC camp looks positive and confident. The excitement of having their 12th man back on the stands is visible on the players’ faces. With East Bengal equally up to the task, we can expect a feisty encounter.