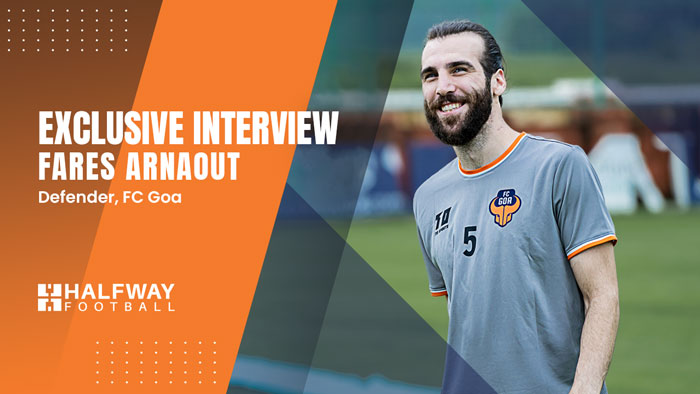 The ninth edition of the Indian Super League kicks off in six days and teams are wrapping up their final preparations. Clubs have been busy in the past few months, signing & extending the contracts of managers and players, arranging friendly matches, partnerships, and more.

FC Goa has placed their former defender Carlos Pena at the helm to guide Gaurs back to their glory. Along with numerous domestic additions, the club brought in five new foreigners retaining Edu Bedia for the sixth season.

On July 1st, 2022 the Goan-based ISL side announced that Syrian international Fares Arnaout has put pen to paper with the club. The 25-year-old defender signed a one-year deal to fill up the Asian slot of the Gaurs. Arnaout recently joined Halfway Football for an exclusive chat where he speaks up about his move to India, about head coach Carlos Pena and the players, experience in the country till now, and much more.

“One of the best moments of my career so far was my debut with the Syrian national team. I still remember the day – July 8, 2019 – and our opponents were North Korea in the Hero Intercontinental Cup. We won 5-2. That was in Ahmedabad, and that’s another reason why India is special to me,” the defender recalled his favourite moments in his career till now.

“India holds a special place in my heart”

The move to FC Goa is not Fares’ first experience in the Indian soil. When asked about India and the football here, he replied, “As I mentioned earlier, India holds a special place in my heart as I made my debut for Syria here. I also played against the Indian national team in the same tournament, and Brandon Fernandes was a part of India’s squad for the match.”

When asked about the reason for joining FC Goa, ISL’s first League Shield Winners, Fares said, “After stints at various clubs in Syria and Bahrain, I was looking for a new challenge when FC Goa came calling. I had come to know that Goa are one of the top teams in India, having won the Hero ISL League Winners’ Shield once and having also played in the AFC Champions League.”

“I had previously come to India to play for my national team, Syria, in the Hero Intercontinental Cup 2019. So, I was already aware of the fans of Indian football, and their passion and love for the sport. All of the above reasons helped me make up my mind to sign for FC Goa.”

“Before signing for FC Goa, I had watched several of the Club’s highlight videos and match replays online. Those videos also gave me a good idea about how the FC Goa fans love their club and the players. I also followed the Club’s journey in the AFC Champions League 2021 – I felt Dheeraj Singh, Brandon, Sanson Pereira, and so on did well,” said the first Syrian footballer to sign for an ISL club.

“I feel that the team is shaping up well under him (Carlos Pena).”

When asked about head coach Carlos Pena and how he’s shaping the team, the Syrian international replied, “Coach Carlos Pena is a wonderful person. It’s amazing as to how well he knows the players, this also helps him bring the best out of each of them. He’s a kind man and cares about each of us, and at the same time a disciplinarian on the training ground as well.”

“I feel that the team is shaping up well under him. He knows what he wants from each one of us and has hence identified roles and responsibilities for everyone in the team. With him leading us, I believe we’ll have a great season,” he added.

Fares opened up about his ambition and what the club is aiming to achieve this time, “As an FC Goa player, my top objective is to win trophies with my team. This season, we will be challenging for the Hero ISL League Winners’ Shield, the Hero ISL Trophy and the Hero Super Cup. Individually, I aim to contribute well to my team’s performances so that we succeed in both the ISL and the Super Cup.”

“I’m sure that Coach Carlos Pena and the rest of the staff trusts me with my abilities. Hence, when given the chance, I’ll give my 100% – both on the training grounds and in matches,” he quoted trusting his abilities.

Fares went on to say about his experience with the team till now, “We started training together in mid-August, so we’ve been doing it for nearly one and a half months now. The team trains every day, with the exception of an off day during weekends. The Salvador do Mundo Panchayat Ground is a very nice place to train – it gives me great joy to step on to the training pitch there every day.”

Anwar Ali is one of the brightest prospect in the Indian football. He started 10 games for FC Goa last season after signing for the club on loan in January. Fares Arnout said, “Anwar is just one of the many young talents that we have here at FC Goa. By playing for FC Goa, one could say they’re on the right track. If they continue to work hard, they will surely develop to be among the best footballers in the country. I’ve been able to strike good partnerships with all my friends in the FC Goa defence. We work on improving our chemistry everyday in training.”

He further mentioned about the young players at the club, “At FC Goa, we have a very good squad. The players are technically skilled and also versatile. As I mentioned earlier, our youngsters have a lot of potential and could develop into some of the best players that India has ever seen.”

“Together we’ll make this season memorable for all of us.”

Fares ended the conversation with a message to the fan, “I’d like to thank the fans for their constant support and encouragement. I also want to assure them that we’re all working hard to give them more happiness with our performances and good results this season. I can’t wait to greet them at our fortress, the PJN Stadium in Fatorda. Together we’ll make this season memorable for all of us.”