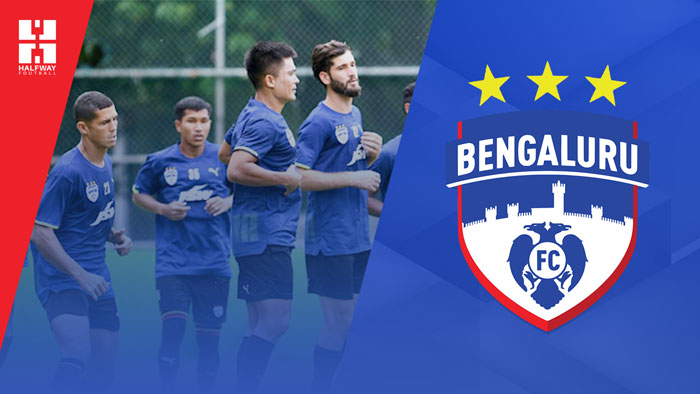 New season, new faces, new goals! After a major overhaul, Bengaluru FC is all set to fire up this season under the new head coach Marco Pezzaiuoli. In a messy 20-21 season, Bengaluru FC had to sack their champion coach Carles Cuadrat after a series of disappointing performances. The interim coach Naushad Moosa took the command and did fairly decent by the last season’s standards.

Halfway Football takes you through the strengths and concerns of Bengaluru FC for the upcoming season.

Bengaluru FC has one of the best, if not the best, domestic contingent in the league. The strength of their young boys was seen in the Durand Cup 2021 where they went through to the semi-finals while defeating some of the full-strength teams. They have Indian international stars like Sunil Chhetri, Gurpreet Singh Sandhu, Udanta Singh, Suresh Singh Wangjam, Ashique Kuruniyan, and also some youngsters like Roshan Singh Naorem, Parag Shrivas, Namgyal Bhutia, Siva Sakthi, Leon Augustine and Bidyashagar Singh among many.

This team might have new faces but they look well-gelled due to the comparative number of games they have played together. If there were any tactical concerns in the setup, that must would have been addressed.

One of the major reasons behind the sack of Carles Cuadrat was the injury of Ashique Kuruniyan. His absence majorly affected the way his side used to operate. Ashique also suffered a blow during the AFC Cup campaign. Bengaluru FC will be hoping that such injuries don’t occur throughout the course of the tournament.

During the AFC Cup campaign, the team was in need of an orchestrator. Or a deep-lying playmaker as many people would say. To say it in more familiar terms, they missed someone like Dimas Delgado in that section of the pitch. However, Danish Farooq did play the role very well whenever appointed.

Another concern regarding this team is something related to basic tactics. By the looks of things so far, the full backs in this side don’t operate as high as you would expect from a team having Sunil Chhetri at the wings. Before something like last season happens again, Marco needs to address these things.

With the variety in options this team possesses, they can shift into any formation of the choice. 4-4-2 and 4-3-3 looks the most effective one as these formations suit the profile of players they have.

Players to watch out

When it’s Bengaluru FC, it’s always foreigners who top this list. Reason is not the one their fans would want to hear. Ever since Miku, they have failed to recruit a striker anywhere near him who fits in the tactics perfectly. This time, they have signed Congolese International Prince Ibarra as the striker. Alongside Cleiton Silva who has been retained.

Among a wide variety of players, Prince Ibarra, Bidyashagar Singh, Iman Basafa, Bruno Ramires and Siva Sakthi are some of the players to watch out for this season.

They will be one of those teams battling for a top four spot. On paper, they have the potential to be in the playoffs. But, considering the squads of other teams, a top four finish is not guaranteed this time.