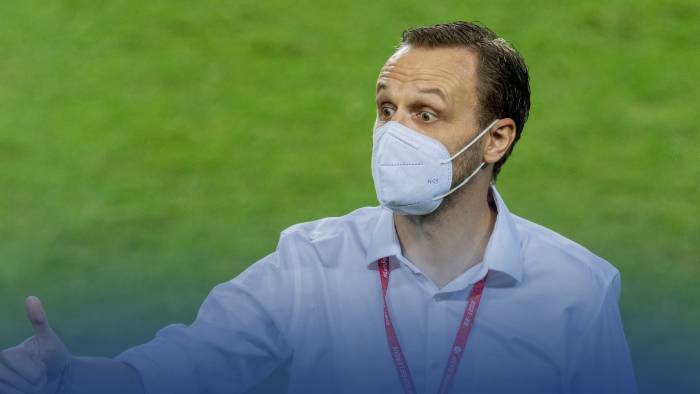 Kerala Blasters FC will meet Jamshedpur FC at the GMC Athletic Stadium tomorrow. The game will be crucial for both teams to secure their playoff spots since they are only one point apart in second and fifth place on the table respectively. Coach Ivan Vukomanovic and midfielder Puitea addressed the media via the virtual press conference ahead of tomorrow’s game.

Even though Jamshedpur FC has dropped points in their previous game, the men of steel are still a force to be reckoned with. Ivan Vukomanovic spoke about their upcoming opponents, Jamshedpur FC, and how difficult the game will be.

“Every game for us since we started is a big fight. We have to be strong if we want to achieve points. That’s our reality. Nobody will give us anything. Our tomorrow’s opponents are tough, very hard to beat, and they deserve to be at the top of the table. We faced them twice in pre-season and once in the regular season, from our perspective they are a hard team, physically tough. There will be many duels and fights to win second balls. I think all teams are now entering into the final period, they have to fight for the points and some teams are suffering from the issues that were not planned like the break due to the Covid [outbreak], and in the last games, many teams are suffering from injuries. So far, we are happy with the boys, the levels they are showing during the training and the games. Tomorrow’s game will be tough, there will be many duels and I think the more concentrated team will get on top. Like I always say, let the best team win.”

“Teams have to be prudent about the fitness level of the players. We’ll see tomorrow. We have many games ahead of us in a short term. We are expecting a tough game,” he added.

If Kerala Blasters win the game tomorrow, Vukomanovic would smash the records for most points and wins in a single season as KBFC head coach. When questioned about it, Ivan said, “Now that I know about it, it will give me extra motivation from the perspective of the coaching staff, we cannot base our preparations and strategies on these statistics. These stats are very nice to hear, of course, we want to get as many points as we can, and we intend to fight for every point. Seeing the circumstances from previous seasons and the situations since we started, we don’t have this right. I don’t want to be someone who announces big things and says big words. We want to continue because we started this season with a strategy and vision not just for winning this season but also to build a strong base for the upcoming seasons. There are seven more games to go, and we want to be high up the table, and it’s possible till the end.”

Coach Vukomanovic also spoke about the support the team is receiving from its fans. The support and energy provided by the fans motivate the players to perform better and fight for them on the pitch.

“We will fight for it, and we will give everything because of the support and energy we get from the fans, all these boys have more motivation to fight for them. We are sorry because we can’t play in front of our fans in Kochi, but the situation is like this, so we have to adapt. We are motivated seeing the fact that you are working well, you have a nice atmosphere, positive attitude, smiling and enjoying playing together, as a coach, it makes me happy seeing all this. We will keep fighting, there are 20 more days until the end of this regular competition.”

After the Covid outbreak in several teams’ camps, the schedule for ISL was reworked. The points’ table is as tight as the revised schedule. The coach explained how difficult the games will be as the teams go into the last stretch of the regular season.

“There were some changes in the calendar due to the covid outbreak in our camp, and now it’s about how you will modify the training program and game plan. We have to take it game by game, seeing who is available. So far, we’re alright. We are expecting Rahul KP to come back soon as an extra weapon. Even if we start speaking about the calendar and all these fixtures being close to each other, we cannot complain because there’s a program and that’s the program from the ISL, and we have to end the regular season by the 6th or 7th of March, and we have to go through all these things. If anybody asks us, of course, we’d like to have the games in a long term, but it’s not up to us, and we have to adapt, we have to go through it and play through games. I think the boys have enough fuel to face every opponent and face every game. We must be ready for every game, but now if we speak about additional pressure I’d say no, we don’t feel it. From our perspective, we started our quest from “second from the bottom” in last season, so we have to work hard and keep building nothing more than that so if anything extra comes in our way, and we are on top of the table, that’s alright we are happy if not we’ll have to continue working hard to be there because we want to be there. Anyone who wants to compete in this league and rank highly should be motivated, and you must have that grinta and passion to reach there. We have that and want to be there, feeling the support from our fans we’ll do everything to be there but in football, you’ll never know anything can happen and anything is possible. In our case, we can guarantee that we will be fighting on the pitch until the last moment.”

Coach also shared some team updates. When asked about injuries, he said, “We don’t have any injuries, everyone is available except for one suspension due to yellow cards.”

Ivan was also asked about the possibility of extending his contract. Ivan is confident in his about it and has assured everyone that he will see us again next year, hopefully in the stadium.

“We had a good conversation and I think there will not be a problem, and hopefully, we’ll see each other next year in Kochi, in our stadium”

Lalthathanga Khawlhring aka Puitea, who was also present at the press conference, spoke about his experience as a member of the reformed KBFC squad.

“I am happy that I got my playing time, especially in my natural position. It’s about hard work, I fought for my place. We are a big club, and we all have the quality, if you want to play them you’ll have to fight for it. Until now, I think we are doing well as a team, it’s about working together, and I think we can continue like this.”

“Every player wants to score, I think even goalkeepers’ dream is to score goals. I am waiting for my first goal of this season, but the team is more important, as long as we get those three points I am happy. I hope I can score a goal in the future,” said the 23-year-old midfielder when he was asked about scoring goals.