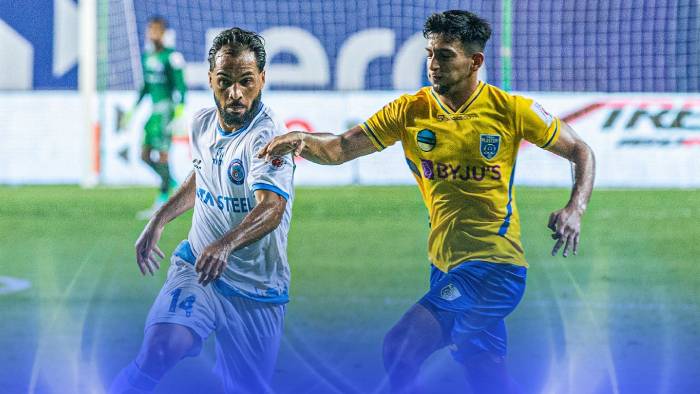 Two teams vying for a place at the top of the table will cross paths in a potential six-pointer when Jamshedpur FC and Kerala Blasters FC meet in the Hero Indian Super League at the Athletic Stadium in Bambolim on Thursday.

Jamshedpur were stopped in their tracks in the last outing, Bengaluru FC getting a win past them to end their three-game winning streak. They are now out of the top four, placed fifth with 22 points from 13 games but head coach Owen Coyle will know all too well that a win will bring them right back into the fray.

Like Jamshedpur, Kerala have also played 13 games and are sitting second in the table having 23 points from 13 matches. The yellow army beat bottom-placed NorthEast United in the last game to get back to winning ways.

Alvaro Vazquez grabbed all the headlines with a stunning strike from halfway line and the Spaniard will once again be expected to lead the line against a much stronger Jamshedpur side.

For Jamshedpur, Daniel Chima Chukwu found the back of the net again in the last game and made it two goals in two games, vindicating Coyle’s decision to get him on board in January transfer window. Chima’s goal against Bengaluru after 46 seconds is the second quickest goal of 21-22 Hero ISL.

“Every game now is going to be a proverbial six-pointer because you are playing against a direct rival. So of course all big games. We need to make sure we are ready for it against a very good side. They have a good coach and some wonderful players. We drew the game the last time against them, we could have won,” Coyle said on the eve of the game. The last time the two sides met, it was a 1-1 draw.

“We need to be clinical against Kerala. We created a lot of opportunities in the last game and we need to be more clinical against a good Kerala side,” Coyle added. Asked about the way forward in their bid to secure a top-four spot, the Englishman said: “The way forward is to gather more points. We need to do that by playing well. But we will take one game at a time and we are thinking about only Kerala now and nothing else.”

It will also be a battle between two teams who have the most creative players with the likes of Greg Stewart and Adrian Luna in Jamshedpur and Kerala ranks respectively.

Vukomanović said the game will be tough as Jamshedpur have a great team but he and his wards are ready to fight.

“So far we are happy with the boys and the training sessions. Tomorrow’s opponent is a tough team. It will be a very hard game. The team who stays more concentrated will go on top,” he said.

“We want to fight for the fans. The energy we get from them is amazing. We are motivated to finish higher up the table. We are all smiling together and enjoying playing together. It is very tight but we will keep fighting,” he added.