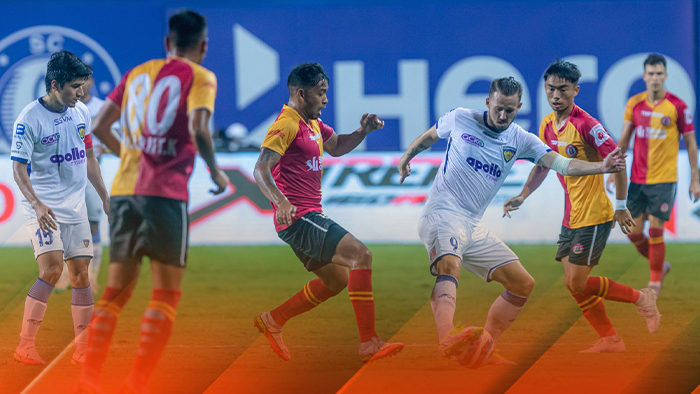 SC East Bengal denied Chennaiyin FC a chance to rise to third with a 2-2 draw in the 2021-22 Hero Indian Super League (ISL) at the Tilak Maidan Stadium. The red and golds scored in injury time to deny three points to Bozidar Bandovic’s men, who rise to sixth, one point behind the fourth-placed team in the table.

The Marina Machans raced into a two-goal lead through goals from Hira Mondal (2’ OG) and Ninthoi (15’) in the early stages of the match. Darren Sidoel (61’) pulled one back with a well-hit free-kick and the equaliser finally came through Lalrinliana Hnamte (90+1’) which ended the game in a draw.

CFC went into the lead in the second minute of the match after Suhail Pasha’s header took a deflection from Hira Mondal and went inside the net for an own goal. The left-back’s night became worse at the stroke of the 15th-minute after his individual error led to the second goal. Ninthoinganba Meetel made the interception on the right flank, made room for himself and smashed the ball in the top-left corner to extend the lead to two.

At the half-hour mark, Antonio Perosevic had a chance to reduce the deficit after beating his marker but the forward sent his shot wide. A minute before the halftime whistle, Marcelo Ribeiro’s diving header went off-target from close range. The Red & Gold Brigade pushed with more intensity in order to score in the first half but the CFC defence gave them no room to enjoy.

The restart saw SCEB continue their push for the first goal with the first shot on target coming through Mahesh Naorem Singh. At the hour mark, the goal finally came through Darren Sidoel who scored from a direct free-kick which was hit with a lot of power. The last ten minutes of the game saw both teams majorly cancelling each other out without creating scoring opportunities.

The relentless pressure from SCEB finally paid dividends with Lalrinliana Hnamte scoring the equaliser with a header. The forward was left unmarked inside the box and punished CFC with an accurate headed goal. There wasn’t enough time for either team to find the winner, leading to the points being shared between them.

Chennaiyin FC will next face defending champions Mumbai City FC at the PJN Stadium on Sunday whereas SC East Bengal will lock horns with Odisha FC at the Tilak Maidan Stadium on Monday.