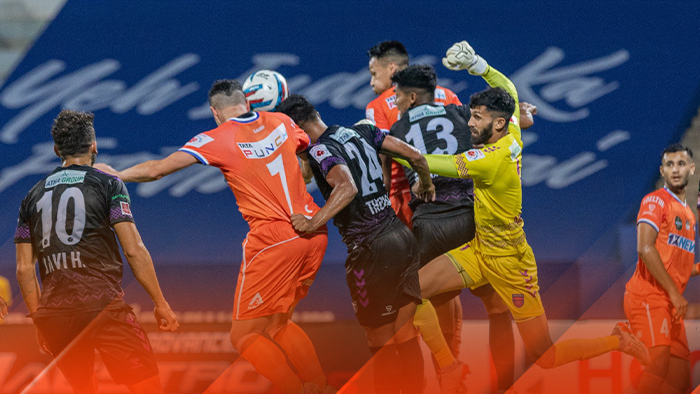 Odisha FC suffer a huge blow in their quest for semi-finals qualification after a 1-1 draw with FC Goa in the 2021-22 Hero Indian Super League (ISL) at the Athletic Stadium in Bambolim. Goals from Jonathas (61’ P) and a last-minute equaliser from Romario (90+5’) meant that neither team would take away three points.

The result prevents OFC from rising to fifth place in the points table, level on points with Bengaluru FC and Kerala Blasters FC. As for FCG, the winless run extends to five games in the division.

Plenty of end-to-end stuff was observed in the starting few minutes by both teams. The Gaurs had a bigger share of the possession but struggled to translate it into scoring opportunities. Airan Cabrera got space behind OFC defence at the first quarter of the hour but ended up elevating hit shot above the crossbar. On the other end, Liridon Krasniqi missed a great opportunity to score owing to brave goalkeeping from Naveen Kumar.

Arshdeep Singh also had to pull off a strong save from Edu Bedia right after the drinks break. Princeton Rebello thought he had scored at the 40th-minute mark until Thoiba Singh made a goal-saving block inside the box. Both teams lacked inspiration in the attack, leading to no goals at the halftime break.

Post the restart, Aridai Cabrera demanded a penalty for a potential handball but to no avail. The striker got his shot past the goalkeeper but saw it blocked by the defender, seemingly with the hand. However, right at the hour mark, the Kalinga Warriors were awarded a penalty after Javier Hernandez was tripped by Alberto Noguera inside the box. Jonathas stepped up and sent his spot-kick into the top left corner for the breakthrough goal. A few minutes later, Jerry Mawihmingthanga came close to extending OFC’s lead but his chip hit the crossbar as it had too much elevation.

Derrick Pereira made several changes heading into the last stage of the match, pushing for the equaliser. Four minutes were added for stoppages which saw more pressure from the Gaurs, looking for that elusive equaliser. It finally came through Romario who scored through a header in the final minute of the added time, thus sharing the points between both sides.

In their upcoming fixtures, Odisha FC plays bottom-placed SC East Bengal at the Tilak Maidan Stadium on Monday whereas FC Goa has a nine-day rest period before their clash with Chennaiyin FC at the same venue on Thursday.