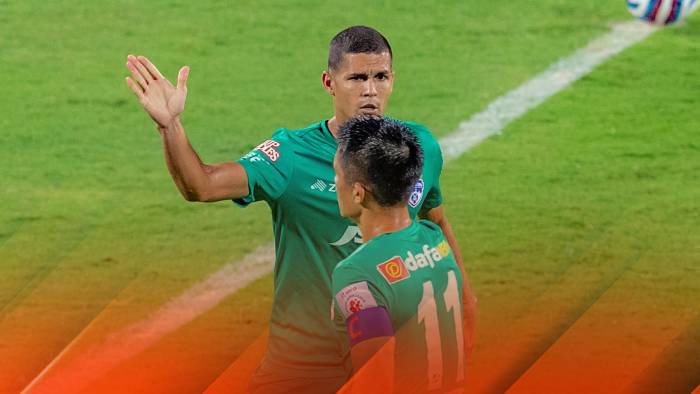 Bengaluru FC made it three wins on the spin to move to the third spot, riding a come-from-behind 3-1 victory over Jamshedpur FC in the Hero Indian Super League at the Athletic Stadium in Bambolim here on Saturday.

Daniel Chima Chukwu had given Jamshedpur the lead inside the first minute but Bengaluru made a roaring comeback in the second half, Cleiton Silva (62nd, 90th) scoring twice on either side of Sunil Chhetri’s equaliser in the 55th minute.
Chhetri scored his 49th goal, equalling Hyderabad FC’s Bart Ogbeche who became the all-time highest scorer of the Hero ISL the other day with 49 strikes as Bengaluru stretched their unbeaten run to eight games. Bengaluru now have 23 points from 15 games, same as Kerala Blasters who are second due to better goal difference.

Jamshedpur dropped to fourth with the loss with 22 points from 13 matches.

Jamshedpur were in the ascendancy in the very first minute of the game, Chima getting on the scoresheet for the second consecutive game since joining the Men of Steel.

Alexandre Lima carried the ball through the heart of the pitch and passed to Borish Singh who lay it up for Chima who got in between Alan Costa and Roshan Naorem to first trap the ball and then fire it into the roof of the net.

Pegged back so early on, Bengaluru tried hard to equalise but Jamshedpur, missing the services of skipper Peter Hartley due to suspension, sat back and defended well as a unit. The Blues’ best chance of the half fell to Chhetri who could not turn in a brilliant Roshan corner despite having to head into an empty net after keeper T.P. Rehenesh committed early. The skipper dragged his header wide and had his hand on his head as his team went into the break trailing by that solitary goal.

The Marco Pezzaiuoli-coached team came out all guns blazing in the second period and Chhetri atoned for his miss just before halftime to fire home from inside the box after a long throw from  Parag Shrivas saw the ball come off Bruno Ramires’ legs and into the path of the veteran marksman.

In the next seven minutes, Bengaluru doubled their lead. The hard-working Naorem swung in a superb corner for Silva to nod in past an outstretched Jitendra Singh and into the back of the net. Bengaluru were all over Jamshedpur after taking the lead, Silva and Chhetri combining to almost set Udanta Singh in the clear only for Ricky Lallawmawma to intercept.

Silva doubled his tally in injury time, making the most of Narender Gahlot’s botched clearance from a throw-in to beat a defender and fire into the far post from a tight angle. Jamshedpur had their chances but Chukwu and Stewart were denied from the goal line as it was Bengaluru’s day in office.