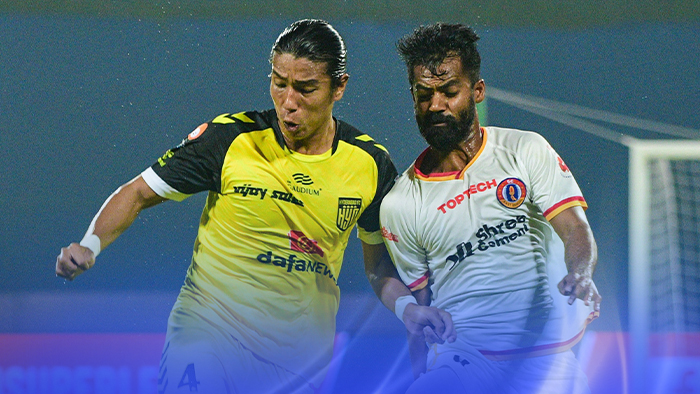 Bolstered by the first victory of the season, SC East Bengal will look to build on their momentum when they take on Hyderabad FC in the 2021-22 Hero Indian Super League at the Tilak Maidan Stadium on Monday.

Naorem Mahesh Singh scored a brace as SC East Bengal logged their first three points after 11 games this season to move up from the foot of the table. New coach Mario Rivera got off to a winning start after taking charge and the red and gold brigade would hope the Spaniard can mastermind a turnaround.

“When you win, the vibe around the training ground is always better. While the previous win doesn’t make the next matches easier, but it does help a lot in terms of the confidence of the players,” Rivera said, banking on momentum from his first game in charge.

The ‘home’ team would welcome back star winger Antonio Perosevic into the fold after the Croatian missed five games due to a suspension for violent conduct against the AIFF-appointed referee. Despite playing just seven games this season, Perosevic is SC East Bengal’s top scorer with 2 goals and his 1 assist is also the joint highest by an SC East Bengal player.

Perosevic has created nine chances this season, the joint-highest by an SC East Bengal player this season along with Amir Dervisevic and Mohammed Rafique. SC East Bengal will also have the services of new Brazilian recruit Marcelo Ribeiro who joined training and is expected to at least make the bench.

“Having Perosevic back will help the team a lot. He is a top-quality player. He is fast, can score, and also assist. So he will be very important for us. Marcelo will play in the match. We still don’t know if he will start or come in the second half, but he will be involved,” Rivera revealed ahead of the match.

“According to me, Hyderabad FC is one of the best teams in the league. They have a great balance in attack and defence. They are helmed by a very good coach who plays a fast, attacking-based football and the team also has the highest goal scorer in the league in the form of Bartholomew Ogbeche,” Rivera said, praising the Nizams.

Hyderabad, on the other hand, have been winless in the last three games and head coach Manolo Marquez will know all too well that he cannot take SC East Bengal lightly. The side are placed fourth in the table but a win is absolutely necessary for them to stay in the fray for top-four with teams like Mumbai City FC, Odisha FC and ATK Mohun Bagan breathing down their neck.

Hyderabad will have Bart Ogbeche returning for this game but Javier Siverio has made a strong case for himself to be retained in the starting XI and it should pose as a good headache for Marquez. Siviero scored the only goal for Hyderabad in their 1-1 draw against Chennaiyin. It was his 3rd goal in 4 games and his 4th of the season. He is the second-highest goalscorer for Hyderabad this season.

“When we went eight games unbeaten, we were always in the run for the top spots. Now, the situation is, if we win tomorrow, we will be back in the higher positions on the table. In this case, the opponents are not important. Does not matter if SC East Bengal are in the lower half of the table. We have a game and we have to win,” said Marquez.

The last time the two teams met, the game ended in a 1-1 stalemate.