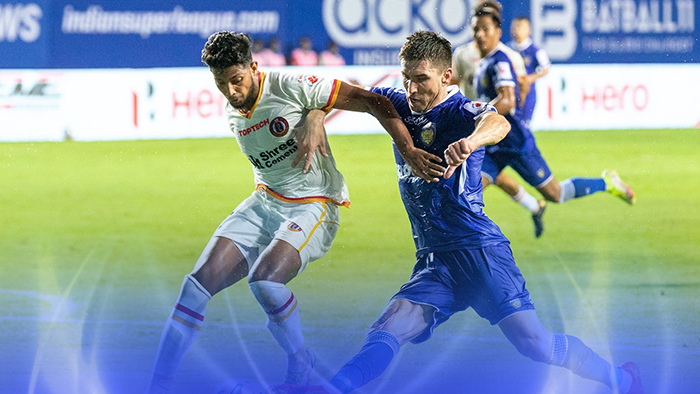 Reeling from the heartbreaking derby defeat, SC East Bengal will have nothing to lose when they take on Chennaiyin FC in the 2021-22 Hero Indian Super League at the Tilak Maidan Stadium on Wednesday.

Placed bottom of the table with just nine points from 14 outings, the Mario Rivera-coached side have all but lost their chance to stake a claim for the semifinals but will look to improve their tally with their second win of the campaign against Chennaiyin.

SC East Bengal have conceded 28 goals in their 14 matches so far, the second-most by a team this season. Since Riviera’s arrival, they’ve been even more compact and narrow and forced teams to play from out wide. The number of crosses put in by the opposition in the last 3 matches highlights this playing style. In his three games in charge, the opposition have put in a total of 80 crosses.

“The confidence of a team is more related to the performance than the results. Sometimes you can play well and lose and vice-versa. Our performance is much better than the results so the players are in a good space mentally,” Rivera said on the eve of the match.

Brazilian striker Marcelo Ribeiro started for the first time for SC East Bengal in the last game, and Rivera opined his link-up play with Antonio Perosevic is one to look out for and it would have helped had he been there from the start.

“Marcelo and Perosevic’s combination is one to watch out for. It is difficult because Marcelo cannot speak English but they are starting to understand each other now.”

For Chennaiyin, placed seventh in the table with 18 points from 13 games, a win will catapult them back to the top-four. Lallianzuala Chhangte joined Mumbai City FC on loan on transfer deadline day but head coach Bozidar Bandovic would like to believe he has other options to fill in his boots.

“We tried to replace him, but some players were expensive while the others were under contract. We have to play with who we have for the rest of the season,” Bandovic said while revealing it was Chhangte’s decision to leave the club on deadline day.

“I will stick with the same formation (3-5-2). There is no problem with the system. I believe it’s hard for us to play 4 at the back. The midfield is at its strongest when we play Koman, Ariel and Thapa,” added the Montenegrin.

Right-back Reagan Singh is set to make his 100th Hero ISL appearance if he features for Chennaiyin FC on Wednesday. Bandovic would also want his team to get back among goals. No team has scored fewer goals in the league than Chennaiyin FC (12). The club have scored 6 open play goals this season, fewest in the league after SC East Bengal (4).