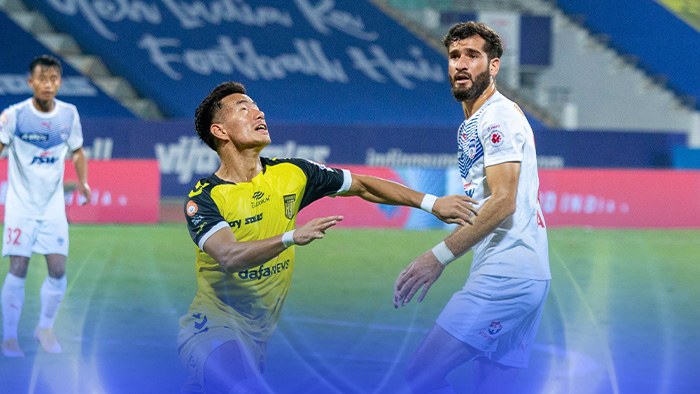 A chance to close the gap on leaders Hyderabad FC will motivate Bengaluru FC no end when the two teams clash swords in the Hero Indian Super League at the Athletic Stadium in Bambolim on Friday.

Bengaluru are on a nine-game unbeaten run, having turned around a poor start to the season in some style to remain in third place having 23 points from 15 matches.

A win against leaders Hyderabad will see them go level on points with their southern rivals, and that should keep Marco Pezzaouli’s charges on their toes.

Hyderabad failed to consolidate their lead at the top after a narrow defeat to ATK Mohun Bagan, leaving Kerala Blasters FC with a golden opportunity to reclaim pole position as they have two games in hand as compared to Hyderabad and Bengaluru. Kerala are placed second with 23 points from 13 outings.

“We’re looking at ourselves, because we’re unbeaten in nine games. We’ve won our last few games, and we’re in a better condition after quarantine. We got ten points from the last four games, which has been a good return,” said Pezzaouli.

On Hyderabad, he added: “They lost their last game, which is an important point, because it helps us spot some weaknesses. We need to be very compact. They are a very good team in transition, fast players in the offensive areas and Ogbeche is the man in the box, so we need to avoid counters.”

The sub-plot to the encounter is also Bartholomew Ogbeche and Sunil Chhetri facing off. The two joint-highest goal scorers in Hero ISL history will clash against each other as they battle to become the first player to reach the 50-goal milestone in the competition.

For the Blues, Cleiton Silva getting back among goals also augurs well as they prepare for the final push in the business end of the season.

Brazilian forward Silva ended a four-game goalless streak as his brace helped Bengaluru come from behind to win 3-1 against Jamshedpur in their last game. Silva took his tally to seven league goals, putting him third in the Golden Boot Race along with Jorge Ortiz (7) and behind Ogbeche (14) and Igor Angulo (8).

Hyderabad lost the last game but have continued to do well consistently throughout the season with Ogbeche at the heart of their goalscoring form and also the Indian youngsters doing well. They have contributed to 22 goals this season. No other team
has this many contributions from Indians to their team’s goals this season.

“It was the first game we lost in the second leg. We can’t win all games in a season. We were not good in general the other day and we lost against a very good side. We now have to be focused against BFC. The fight is still open for a top-four place for many teams,” Marquez said on the road ahead.

On Bengaluru’s current upturn in form, he added: “We cannot think about how many points we need. We have to play against BFC and let’s see what happens. If we win, we will see things in a different way. If we lose, we have to continue fighting. Nothing will be decided before the last round.”