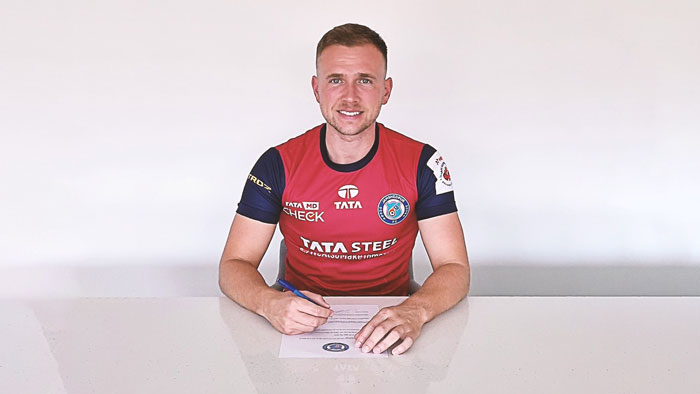 Jamshedpur completed a major singing in the form of Scottish Premiership Champion Greg Stewart.
The attacking midfielder is freshly arriving from a Rangers squad that went the entire 20-21 season
unbeaten on its way to win the Scottish top division. This breathtaking campaign was under the
tutelage of former Liverpool legend Steven Gerrard.

Stewart was thrilled to take up his new challenge with Jamshedpur as he said. “I am so excited to see
what this season has in store for us. It’s a new adventure for me and one I am really looking forward to.
It’s going to be an amazing experience to work under Owen Coyle and give everything on the pitch to get
silverware for Jamshedpur. Just can’t wait to get started.”

At Rangers, Stewart was part of a blazing group of forwards and midfielders that set the Scottish
Premiership on fire. He played with the likes of Jermaine Defoe, Glen Kamara, Morelos and Itten. Prior
to spending two seasons at Scottish legacy club Rangers, the 31-year-old played for various clubs
across Scotland and England. The midfielder has made a total of 355 club appearances in his career.

We are proud to announce the arrival of Greg Stewart, to the Jamshedpur 🔴⚔️

Jamshedpur FC Head Coach, Owen Coyle divulged details on how the move came about. He said, “We
were looking for a versatile and creative midfielder in the market to complete a menacing group of
attacking players for our squad. Greg fit into that criterion perfectly. He comes with exemplary experience
of playing in the biggest leagues across the UK. And of course, he had an amazing opportunity to play for
one of the Glasgow giants which shows he has a strong and winning mentality. The fans can expect a lot
of chances to score goals from Jamshedpur this season.”

The Scottish national began his career at Cowdenbeath in the Scottish Championship where he spent
four seasons. After impressing with his first club, Stewart moved to Dundee FC to play in the Scottish
Premiership (the top division of Scotland) for three seasons.

Later, he moved to English Championship club Birmingham City through which he enjoyed loan spells
at Aberdeen, where he finished runners-up in 2017-18 in the Premiership and Kilmarnock. After
finishing 3 seasons as a Birmingham player, Stewart made his move to Rangers.

Stewart has been handed squad no. 24 and will be joining his teammates in the coming weeks for pre-
season.