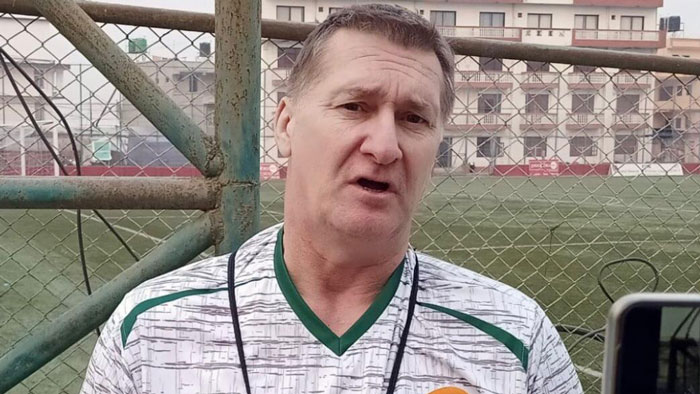 Former Chelsea goalkeeper coach Leslie Cleevely will help SC East Bengal shot-stoppers get better under the bar this season, it was announced on Sunday.

“I have experience of working in this part of the world. Being part of the Bangladesh national team setup where fans are also very passionate about their football, I understand the sentiment well. SC East Bengal is a massive football club and I am proud to be part of that,” said Cleevely. “I have done my homework on the goalkeepers we have and I will do what needs to be done to bring the best out of them. All three goalkeepers are experienced and I am sure they will come out with flying colours,” he added.

Former Chelsea goalkeeper coach 𝐋𝐞𝐬𝐥𝐢𝐞 𝐂𝐥𝐞𝐞𝐯𝐞𝐥𝐲 will help our shot-stoppers 🧤get better under the bar this season!

Cleevely, a UEFA ‘A’ Licence holder, has over 20 years of coaching experience, having started his career at Milwall FC in 1997. Cleevely worked closely with Edwin van der Sar and Maik Taylor at Fulham FC between 1999-2002 before moving to Crystal Palace where he became the first team goalkeeper coach and lead academy goalkeeper coach under Steve Kember.

The 56-year old was also at Tottenham Hotspur as academy goalkeeper coach before jumping ship to Chelsea in 2007 where he spent four years, working in the academy as well as helping the senior team as and when required. At the English Premier League side, Cleevely helped Petr Cech, Carlo Cudicini and Hilario get better between the sticks. Cleevely was part of the Carshalton Academy as well before shifting base to Bangladesh in 2020 where he was the senior team goalkeeper coach.

As a player, Cleevely was an understudy to the great Peter Shilton at Southampton for more than a year, also turning out for Crystal Palace and Notts County. He has played over 1000 games at senior level in Non-League football in England, making 110 appearances for Farnborough Town. Cleevely won several trophies including player of the year on four occasions with Carshalton Athletic, a team he led in over 100 games. He was also at Sutton United, playing over 150 games and also captaining the side.

Incidentally, Cleevely replaced Bobby Mimms at the Bangladesh national team, as Mimms joined SC East Bengal last season as part of Robbie Fowler’s backroom staff. Cleevely now takes over from Mimms as the red and golds prepare for their second season in the top league of the country.

SC East Bengal will face Jamshedpur FC in their opening game of the Hero Indian Super League 2021-22 season, on November 21 at the Tilak Maidan Stadium.