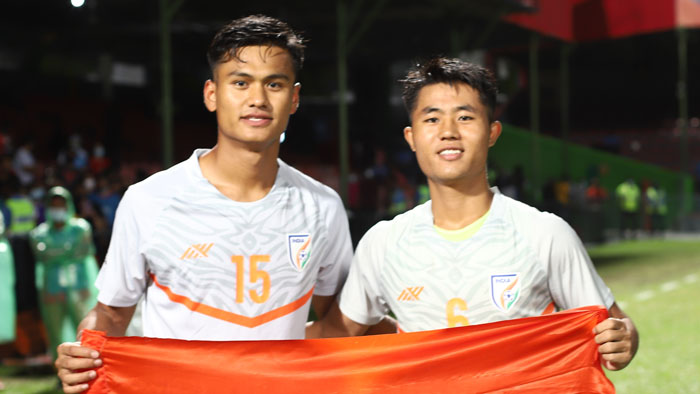 As the India U-23 lads assembled in Bengaluru ahead of the AFC U23 Qualifiers, lavish praises poured in from a different bio-bubble in Bengaluru – that too from someone who has been a mainstay in the middle of the park for the Blue Tigers over the last decade – Mehtab Hossain.

“It was a treat to watch Lalengmawia play – not just the final, but in the matches that he has been fielded. I am particularly happy with his performance – after all, he plays a similar position to myself,” exclaimed Mehtab. “Sunil (Chhetri) was brilliant as usual in the SAFF Championship. I can praise him all day long, and it would still not be enough,” Mehtab said to www.the-aiff.com.

Apuia has come through the ranks from the junior National Teams, representing India in the FIFA U-17 World Cup 2017, before going on to play a crucial role for the Indian Arrows side in the Hero I-League in 2017-18 and 2018-19 seasons.

“Apuia (Lalengmawia) has a very cool head. He makes football look so simple – never in a hurry, and always so much time on the ball. I am very fond of him. I just hope he improves on his play,” Mehtab averred.

After winning the SAFF Championship in Male, Maldives on Saturday, the likes of Dheeraj Singh, Suresh Singh, Lalengmawia Ralte, Jeakson Singh, and Rahim Ali have joined the U23 side in Bengaluru. Among the 28 probables summoned for the AFC U23 Qualifiers, all except Sahil Panwar have reported to Bengaluru. As per medical reports from Odisha FC, Sahil is currently suffering from an injury and hence, wasn’t available for the Qualifiers.

The 35-year-old Mehtab, who is currently playing for Madan Maharaj FC, has been following the fortunes of the Blue Tigers from inside the Hero I-League Qualifiers bio bubble.

“There were others too, who played so well. Pritam played well, it was his cross in the second half that helped us break the deadlock. It was nice to see Suresh score a very important goal that gave us the breathing space in the second half,” he continued. “The midfielders need to capitalise on the chances which they get. If they do, it will help us immensely on the field.”

“The way the team turned it around was a big testament to the mentality of the players and the coach,” said Mehtab. “The killer instinct that they showed, to never accept defeat in the face of adversity shows their character. People, especially footballers go through rough phases, but it’s all about how you come back from such phases. This is exactly what I told the youngsters in our club while watching the matches.”

“Such trophies on the international stage are always good for Indian football, it bodes well for the future. As a former National Team player, I would always love to see the boys win more. That will always help take Indian football forward together,” the veteran midfield general averred.

“Winning is always good for the morale — be it us winning our club matches here, or the National Team winning in Maldives. I’d like to congratulate the Blue Tigers. Any silverware earned on the international level is always good, as you get to go down in history,” he continued.