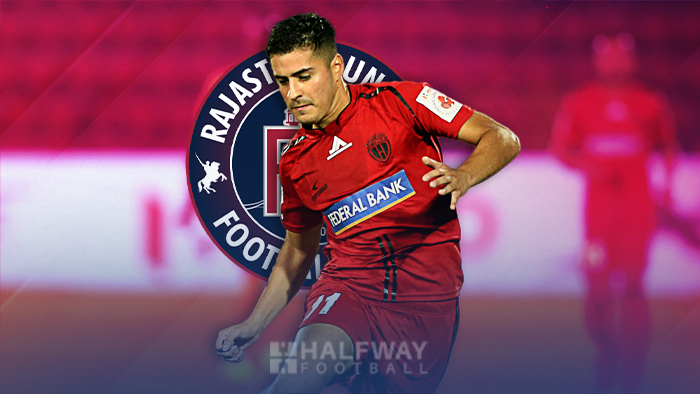 Ahead of the 2022-23 season, I-League club Rajasthan United FC has completed the signing of young attacker Martin Chaves, Halfway Football can confirm. The 24-year-old Uruguayan has penned a 1-year deal with the Jaipur-based club.

“Martin Chaves has signed for Rajasthan United FC for a season-long deal,” a source close to the developments informed Halfway Football. Chaves joins Rajasthan United after a year stint with the Greek side AS Rodos.

Martin Chaves is not a new name for Indian football fans. He played for NorthEast United FC in the 2019-20 ISL season, scoring three goals and assisting another three.

Born in southwestern Uruguay, Chaves has played for Uruguayan clubs like Club Atlético Peñarol and Juventud de Las Piedras, mostly playing for their youth sides. He also had a brief loan stint with Brazilian top-tier side, Gremio’s U20 side. Chaves represented his country’s U-17 side and was highly appreciated for his performance.

The addition of the Uruguayan forward, who can play multiple positions in the attacking zone, will shore up Rajasthan United’s attack this season. The club will participate in the Durand Cup which will be held from August 16, 2022. Rajasthan United will face ATK Mohun Bagan in their tournament-opener on August 20.