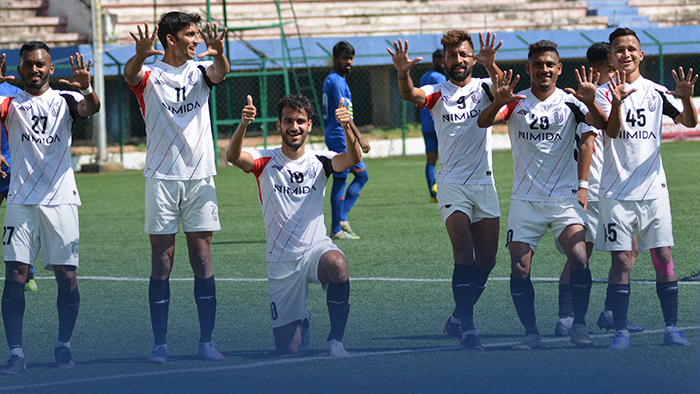 FC Bengaluru United, on Thursday, were confirmed champions of the BDFA Super Division League 2021/22 season, winning the prestigious trophy for the second year in a row. The defending champions remained unbeaten throughout the season, stacking up 13 wins and 1 draw; finishing the season with 40 points. This caps off a stellar domestic run for the young Bengaluru team, who were earlier in 2021 invited to participate in the prestigious Durand Cup.

Speaking on the successful title defence, FC Bengaluru United Head Coach Richard Hood praised the players for their efforts throughout the season.

“A big thank you to all our staff and the ground staff who put in a lot of effort and hard work day in and day out especially when we had a thick run of games in a short span of time,” Hood said. “To walk away from that congestion period with the amount of points that we did was really crucial in helping us secure the title, so all credit to them. And above all to the players, who contributed towards this championship cause, both on and off the field. A big shout out especially to a few names who came in at the last minute – they put their heads down and showed the humility and work ethic that we have come to expect from the team. A big thanks to the senior guys as well who led by example and were great mentors to the younger guys.”

Gaurav Manchanda, owner FC Bengaluru United, praised the team and coaching staff for their commitment and said this win was a testament to the continuing ascendancy of the Bengaluru club.

“This is a moment of great pride and joy for everyone at FC Bengaluru United,” said Manchanda. “To successfully defend our title – and to remain unbeaten while doing so – is a testimony to all the hard work, commitment and passion of our boys. Due credit to all the coaches, support staff and everyone who worked tirelessly behind the scenes to ensure that everything, right from training to strategizing was on point to achieve this objective. The support from Sevilla FC, our international partners, has also played a big role in our success story. An achievement like this also reaffirms our faith that FC Bengaluru United is on the right path to becoming one of the top footballing clubs in India.”

“I would like to thank the BDFA along with the KSFA for successfully organising the league in what continues to remain challenging circumstances,” Manchanda added. “The league was extremely competitive, and it was an honour to have been part of it and emerge victorious for the second year running. We now look forward to building on our strong performance and making a winning impact in the 2nd Division League tournament.”

With the title win, FC Bengaluru United will now look to compete in the 2nd Division League Tournament in 2022. The club had competed in the I-League Qualifiers in 2021 as well, but were unable to reach the final stage of the competition.