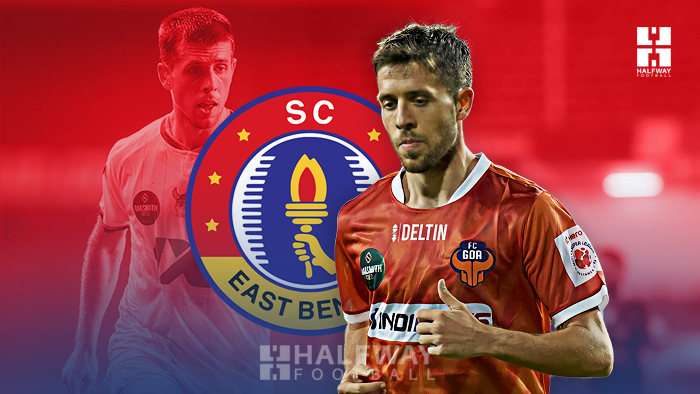 After signing a pre-contract with Iván González, East Bengal has initiated talks with FC Goa‘s thirty-two year old Spanish midfielder Alberto Noguera, Halfway Football can confirm. The club is looking to secure his service after his contract with the Gaurs ends on 31st May 2022.

“The club (East Bengal) is interested to sign Alberto Noguera. They are preparing to send him a pre-contract soon,” a source close to the developments told Halfway Football.

Alberto Noguera began his youth career with Spanish club Getafe and also plied his trade for Rayo Vallecano B, Rayo Majadahonda and SS Reyes. He joined Atletico Madrid, played for the Atletico’s B and C sides before making his debut for the senior team in 2012.

Noguera thereafter moved to England to join former English Championship side Blackpool FC. He moved back to Spain in 2014 and played for quite a few clubs including CD Numancia, Lorca FC and Racing Santander before joining FC Goa ahead of the 2020-21 season.

In his first season with the Gaurs, Noguera provided 8 assists, bagging the Winning Pass of the Season Award. In the 2021-22 season, he continued his bright form, claiming three goals and three assists.

After two dissapponting ISL outings, East Bengal’s preparations for the next season is in full swings as they are eyeing top-quality foreign players and Indian players to bolster their squad. They have already signed Ivan Gonzalez from FC Goa, Mobashir Rahman from Jamshedpur FC and Mohamad Rakip from Mumbai City FC.