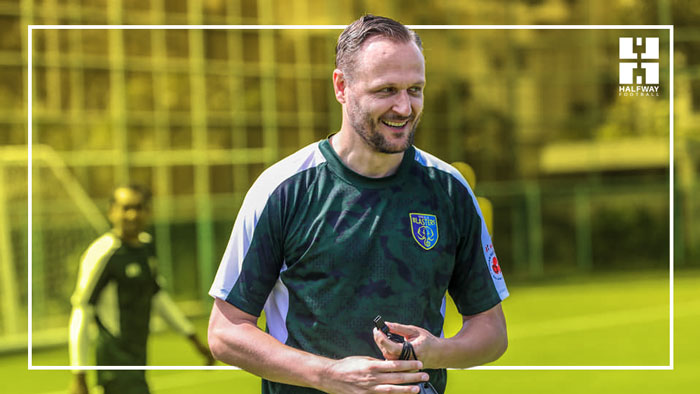 Kerala Blasters are all set to debut in the 130th edition of the Durand Cup, Asia’s oldest football tournament. Ahead of their clash against the Indian Navy, head coach Ivan Vukomanovic and left-back Jessel Carneiro spoke to the media in a press conference.

Importance of Durand Cup for the preparations for the ISL and striking a balance between preparation for ISL and winning this prestigious tournament.

“It’s always nice to compete in these kinds of tournaments. Everyone has a chance to win it. It’s always an honour to be a part of this prestigious tournament. On the other hand, we are in the middle of our preparations for the ISL Durand Cup, meanwhile, is coming in a period where we can use these games as a part of the control of the game, our main goal. These games are at a time at which it will add spice to our preparations as they’re part of a competition.”

“Of course, we would also like to compete hard and prove ourselves here. We are in an interesting group with good opponents. We’ll try to do our best to make Kerala Blasters fans happy,” said the 44-year-old head coach.

About Pre-season in Kochi

“I must admit that I’m very satisfied with all that happened in Kochi. We started on a positive note with good intentions. We’re still in a period, working on completing our team – especially in the case of foreigners arrival. We are pleased that we completed five weeks of training at Kochi with all possible conditions and avoiding injuries. We’re very happy with the effort that the boys showed in every training session. They also maintained professional behaviour both on and off the pitch throughout this period.”

“We’ve built very good relationships with each other. We’re happy, and at the same time, sorry for having left Kochi. It felt really nice there, and I’m very thankful for all the energy and support that we got – especially to all the supporters.”

“Enes, Luna and Chencho are here with us. Chencho had a long break since last season and we’re now working with him to help him get back his rhythm and shape. If I am to speak about the other foreigners, we’re expecting them to be here by the end of next week. But, it depends on the administration in their respective countries, but we have a good relationship with them and they’ve promised us that everything will be settled soon, hopefully, they will join us at the end of next week.”

We bet your smiles are even wider than his 😉@Che7cho looking fine in 🟡!#YennumYellow pic.twitter.com/AxjRYXbCqT

About the mixture of Foreign players this season

“Sipovic and Chencho have had previous experience in the ISL, hence they don’t need much time to adapt. They know the league. For the other players, they have played football, and that is a sport that is played worldwide. So, regardless of their lack of experience in the ISL, they will put forth everything they have learned having played globally and they will become an integral part of the ISL and Kerala Blasters, and improve more moving forward.”

“We took in these foreigners because we saw certain qualities in them, certain aspects that they will bring to the team. So, we are very pleased with the signings and I believe, in the end, we will have a good group of players who will adapt well and create a good atmosphere in the team,” he added.

“Since arriving here, we’ve continued our preparations for the tournament and the ISL. Maybe a few things are not happening as we planned, with regards to training time, facilities and so on. But then, we’re a team that is looking to adapt to these circumstances and continue our work. The past couple of days have not been easy, as we were obliged to train at 8 am in the morning which was not according to our plans. But, anyway, we understand the difficulties behind organizing such a tournament with many teams. So we try to adapt and make the best of the current situation. Meanwhile, hopefully, we will make more progress in the coming days by staying focused on our work.”

“If you speak about the duration of the ISL, it’s short when compared to other leagues across the world. Hence, tournaments like the Durand Cup help reduce the ‘gap’ between two consecutive league seasons and keep players active. At the same time, it’s also important to notice when these tournaments happen. Usually, during pre-season, it’s friendly games that happen and they serve to confirm certain things regarding how you want a team to work. Pre-season is also where we have to be very careful about certain things like injuries.”

Ivan Vukomanovic said about the Durand Cup, ”Durand Cup may be one of the most important tournaments in India. Winning the trophy here would give any team a good feeling. However, the fact that these are not friendly games during pre-season will add something interesting to our work as a team. Hence, we accept the fact that the Durand Cup is here and that we’re playing in it during pre-season. We will try to compete well, but still have the ISL as our primary objective. So maybe, we’ll try to find a balance between dividing playing time among all players, and at the same time try to get good results.”

About opponents in the Durand Cup group stage

“We haven’t thought much about our opponents. This is because we’re in that part of our pre-season where we’re still concentrating mostly on ourselves alone. We want to improve several aspects of, our performances. We mean no disrespect to our opponents, and of course, we’ve watched the previous games and observed some things about them, which will be on our minds in the next couple of weeks.”

What Jessel Carneiro have to say

“Each and every game is the same, whether it’s a practice match or a competitive game. We have to go all-out and give our best. We’re preparing ourselves for the same and we’ve to show our capabilities there, whatever game we are playing.”

“About the injury scare during pre-season – they’re a part of the game. We can’t control it, so we will not step back. At Durand Cup, we’ll give it our all,” added the left-back

He said about his approach for the new season, “My approach is very simple – to win the ISL trophy. About the new coaching staff, it’s not a big deal. Whatever happened, leave it behind.”

“Whether I or Sanjeev play, it’s not important. The important thing is the team. My job is to give my 100% in training. The coach decides the rest. Meanwhile, I’ll give my best and play my heart out whenever I have the chance,” he commented on the competition with fellow teammate Sanjeev Stalin on the left-back position.