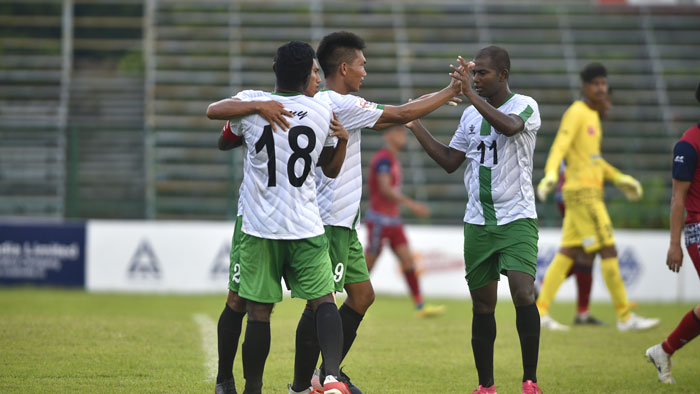 This was the second match for both the teams. While the team from ISL had won their inaugural match, it was a do or die game for Army Green and they played just like that.

The Army Green side started all pumped up and created the first real chance, very early in the first half.Dip Majumdarhad a scoring opportunity inside the box, which he failed to convert. Jamshedpur FC too had their chances but it was clearly the regimental side, who were making their presence felt.

Army Green created a lot of opportunities but failed to convert any of those till close to half time. It was only in the 43rd minute when a beautiful cross by Dip was well received by Deepak Singhwho made no mistake and put it into the net to score the first goal and take his side 1-0 up at half time.

Only a few minutes post half time, Army Green doubled their advantage when a perfect cross was flicked on by Dip Majumdar to Deepak Singh in the box, who scored his second of the match. SochinChhetri scored the third goal of the match to seal the deal for Army Green.

Jitendra Singh scored one for Jamshedpur FC in the 61st minute via a penalty but it was already too late for the ISL side who would want to regroup and come back stronger in the next match.

Deepak Singh, who was adjudged the Man of the Match expressed his delighton winning the match and said, “Itfeelsreally good.We had a lot of chances in the last game as well but could not convert. Today, we had planned and played well. We will prepare more for the next match as it will be a crucial game for us which we will need to win to qualify.”

The only game tomorrow is scheduled between ISL side Kerala Blasters Football Club and the Indian Navy Football Team. It promises to be a pulsating Group C encounter, given a win or draw by the Navy could see it through to the knockouts. The match will be played at the Vivekananda YubabharatiKrirangan (VYBK).