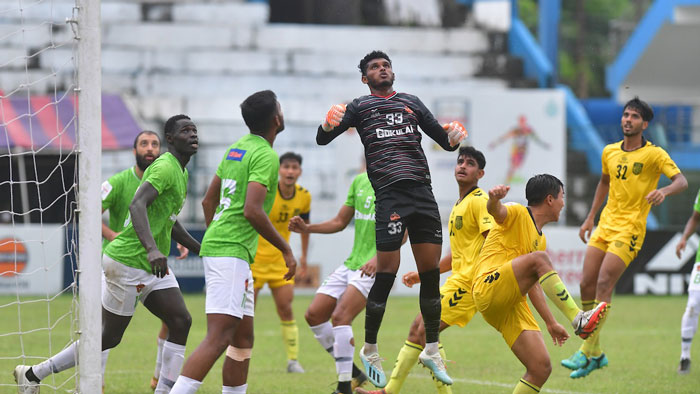 Gokulam started proceedings with very positive intent. They played an attacking game from the word go and created quite a few chances to score. Early on in the first half, GKFC had the first major chance when Rahim Osumanu had the ball right in front of the Hyderabad FC (HFC) goal but he could not put it past goalkeeper Lalbiakhlua Jongte.

A few minutes later, GKFC had another golden opportunity, courtesy a beautiful cross by Osumanu but Emil Benny failed to score. Though Hyderabad had more of the ball, Gokulam had the better chances at goal. Jongte did well to keep it goalless at half time.

In the second half, Gokulam picked up from where they left off, and made an impact immediately. Jongte made a terrific save but Osumanu had the ball on rebound. He made no mistake and broke the deadlock in the 46th minute.

The match took another interesting turn a minute later when GKFC’s Emil Benny received his second yellow card and got his marching orders, leaving the Malabarians a man down.

A rejuvenated Hyderabad team went all guns blazing in the final 30 mins and played an attacking game. But GKFC goalkeeper Ajmal PA made sure to keep a clean sheet and win 3 points for his side.

Gokulam Kerala’s captain and Afghan national Sharif M Mohammad was adjudged the Man of the Match, for his all-round effort.

It will be a double header tomorrow with Jamshedpur FC taking on FC Goa and Army Green Football Team will play against Sudeva Delhi FC in two Group B encounters.