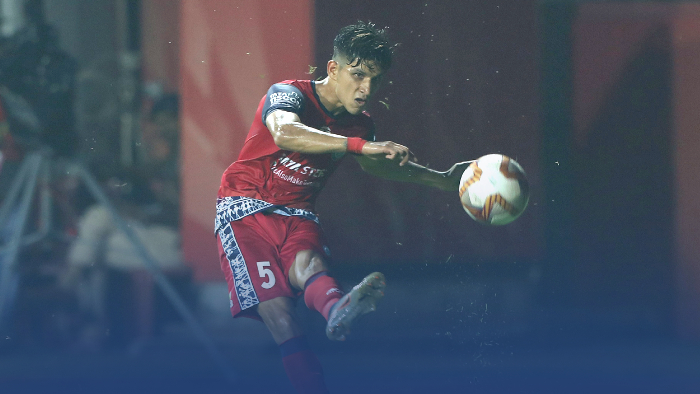 Indian Super League (ISL) club Odisha FC announced the signing of Narender Gahlot, keeping him at the club until May 2025.

Narender came up through the Chandigarh Football Academy, where he started playing as a midfielder. Turned into a center-back by his coach, Gahlot excelled in the role and gradually developed into one of the most promising talents in the country.

After the tournament, he moved to Indian Arrows, where his reputation skyrocketed. He was handed his India senior team debut by Igor Stimac in Hero Intercontinental Cup 2019. In his debut Hero ISL campaign in 2019-20, Gahlot made 11 appearances for Jamshedpur FC.

Narender scored his first-ever international goal in his second match against Syria on 16 July 2019 at the EKA arena in Ahmedabad. With this goal, he became the first Indian player to score for the national team, born in the 21st century, and also became the then second-youngest goal scorer for the national team at the age of 18 years 83 days behind Jerry Zirsanga. Gahlot also won his first Player of the Match award in this match, as the game finished 1–1.

Till now, he has played 36 matches for Jamshedpur. His positioning and tackling skills make him one of the most promising central defenders in the country. Recently, he won the ISL League Winners’ Shield with the Men of Steel.

This is his new home.

Before his tryst with football began, the Najafgarh resident had considered playing cricket as a profession. “During my childhood, cricket was all I knew because of my uncle. Everyone in my family always wanted me to be an expert in any sport though. After one of my friends introduced me to football, my goal changed. I went from playing for IYSA (India Youth Soccer Association) academy in New Delhi to joining Chandigarh Football Academy (CFA) within two-three years,” says Gahlot.

“I also played for Sports Authority of India (SAI) in Dehradun and during my time there, I got selected for the India U-16 squad in 2016. Four years later, I am still learning — from the best now. Sunil-Bhai always shares his valuable experience in the national camp, and Jhingan-Paaji shows me how to be effectively aggressive with my defending.”

Club President, Raj Athwal added, “Narender brings a lot of quality and a winning mentality to our backline. As a young center-back, he has a lot of potential and we hope that he plays his best football for Odisha FC.