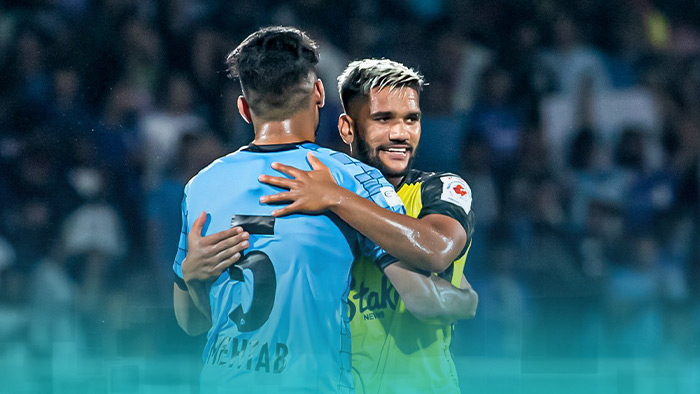 Defending champions Hyderabad FC and Mumbai City FC took a point each as both sides kicked their Hero Indian Super League (ISL) campaign off with an enthralling 3-3 draw at the Shree Shiv Chhatrapati Sports Complex in Pune.

The Islanders started the first half on the aggressive and almost got their noses in front in the fifth minute. Jorge Pereyra found Bipin Singh inside the box with a well-timed through ball but the winger could only ripple the net from the outside with his effort. Ten minutes later, Hyderabad got its first shot on target when Joel Chianese’s freekick was headed straight at Phurba Lachenpa by Chinglensana Singh.

In the 23rd minute, Mumbai City FC drew first blood on the counter. Bipin blitzed down the left flank before whipping a low ball into the box that was deflected into the back of his own net by Chinglensana. Hyderabad FC pulled level in the last minute of first-half stoppage time after Lalengmawia Ralte brought Bartholomew Ogbeche down inside the box and conceded a penalty. Joao Victor sent the keeper the wrong way from the spot to restore parity.

Five minutes into the second half, the game turned on its head as Chianese took advantage of a midfield mixup and played the ball through to Mohammed Yasir. The 24-year-old winger played an inch-perfect pass to Halicharan Narzary who made no mistake in slotting the ball past the keeper. Less than five minutes later, Bipin’s effort was brilliantly saved by Laxmikant Kattimani, denying The Islanders an equaliser.

Seven minutes past the hour mark, it was all square again. Substitute Ahmed Jahouh played a sublime pass through to Greg Stewart. The Scottish striker put the ball past Kattimani with ease to bag his debut goal for The Islanders. Less than ten minutes later, The Nizams took the lead again. Substitute Borja Herrera whipped a corner in towards the far post as Odei Onaindia headed the ball back across the goal before Victor nodded it in from close range.

In the 85th minute, parity was restored yet again. Bipin pulled the ball back towards Stewart. The striker played it through to substitute Alberto Noguera who side-footed the ball into the net from close range. Both sides looked for a winner in the closing stages of the match but ultimately settled for a point.

Hyderabad will travel to Guwahati for their next game against NorthEast United on Thursday, October 13th. The Islanders will make a short trip back to Mumbai to host Odisha FC on Saturday, October 15th.