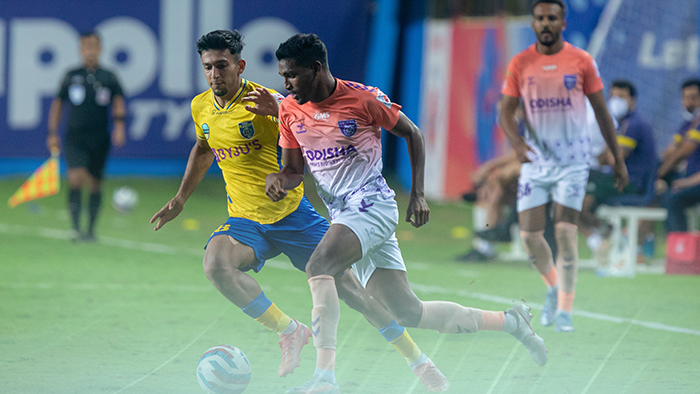 The Hero Indian Super League (ISL) returns to Bhubaneswar after a two-year hiatus as Odisha FC host Kerala Blasters FC at the Kalinga Stadium on Sunday, October 23. Both sides will be desperate for points as they come into this fixture after losing their previous matches.

The last time Odisha FC and Kerala Blasters clashed at this venue, the game ended in a thrilling 4-4 draw. The Juggernauts have played six matches at the Kalinga Stadium, winning four and losing just one.

The hosts will be eager to build on their stellar home record and get a result against the Blasters. However, it will be anything but a cakewalk for the Juggernauts, who have won just one game in their last six games against them.

“We are happy to be back home, playing at the Kalinga Stadium again. We have good memories here and all the players are excited to perform well tomorrow,” said Head Coach Josep Gombau.

“We hope fans come in numbers to see the game and I hope we start with a win at home,” he added.

In their last game, Odisha FC attempted 16 shots, nine more than their opponents Mumbai City FC. However, seven were blocked, six were off-target, and just three made the keeper work. Shot accuracy is an aspect the Juggernauts will have to improve for the upcoming game.

Striker Diego Mauricio has enjoyed playing against the Blasters in the past. The Brazilian, who has already scored twice this season, has netted five goals in three games against them in his Hero ISL career so far.

In their respective last games, both sides displayed a similar pattern in the final third. In a 5-2 loss against ATK Mohun Bagan, Kerala Blasters attempted 18 shots, out of which five were blocked, six were off-target, and seven tested the keeper.

Their opponents, on the other hand, kept all their shots on target and eventually waltzed away with a crucial victory. The Blasters will have to be more clinical in the final third if they want to be a menace for the Odisha FC defenders.

Ivan Kalyuzhnyi is in fine form and has scored three goals in two games this season, with a shot accuracy of 100%. The Ukrainian has gelled well with Sahal Samad on the right flank and could cause problems for the Odisha FC defence.

“Tomorrow we will experience the away atmosphere after two years. It will be a new experience for many of our players. We expect Odisha FC to be strong and aggressive,” said head coach Ivan Vukomanovic.

“As a team, we always want to be prepared and aggressive ourselves. We want to show our quality because the boys want to compete and show that we are capable of winning games,” he added.

Odisha FC and Kerala Blasters FC have faced each other on six occasions. Three of these encounters have ended in a draw. The Juggernauts have scored a total of 11 goals and won just once in these six meetings, while the Blasters have nabbed a couple of wins and scored 12.