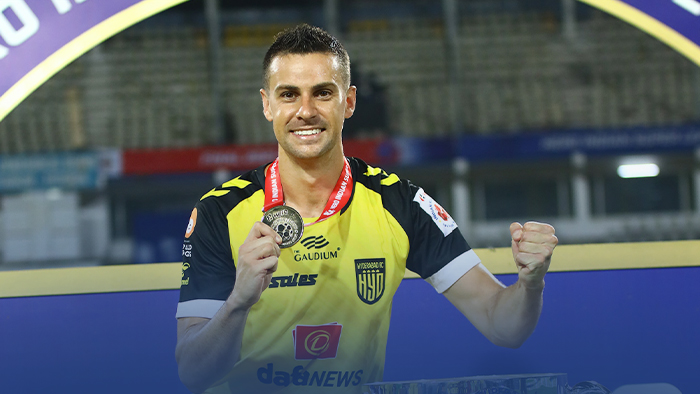 Versatile Australian attacker Joel Chianese has signed a new contract with Indian Super League Champions Hyderabad FC to extend his stay with HFC into the third season, the club announced on Monday.

“I am very excited to be a part of the HFC family for another season. We’ve tasted success and now it’s an exciting challenge to see if we can reproduce that again,” said the 32-year-old after putting pen to paper on a deal that will keep him at the club till the end of the 2022-23 season.

Introduced to the Indian Super League in 2020 by Hyderabad FC, Chianese is now a Champion, having played a crucial role in the two seasons at the club under Manolo Marquez.

An ever-reliable player in the squad, Chianese is a trusted overseas option for Manolo, and it is this trust that made it easy for the Australian to extend his stay in Yellow and Black.

“I think Manolo has a way of getting the best out of the Indian players but also managing the foreign group very well. He’s very approachable and that goes a long way to creating a good relationship,” Chianese said, speaking about his bond with the boss.

He already has 31 appearances for the club, where he has registered seven goals and four assists, most of which helped HFC win some crucial points, including the successful 2021-22 campaign.

Chianese is also a cheerful presence on and off the field and it is no surprise that his No 7 jersey is one of the most popular among the HFC faithful. He is a fan favoruite already and he hopes that the Gachibowli Stadium will be loud and noisy next season.

“We really can’t wait to play in front of you all at our home stadium. We have felt the support from afar the last 2 seasons held in the bio-bubble and now it’s time to be loud,” added Chianese.