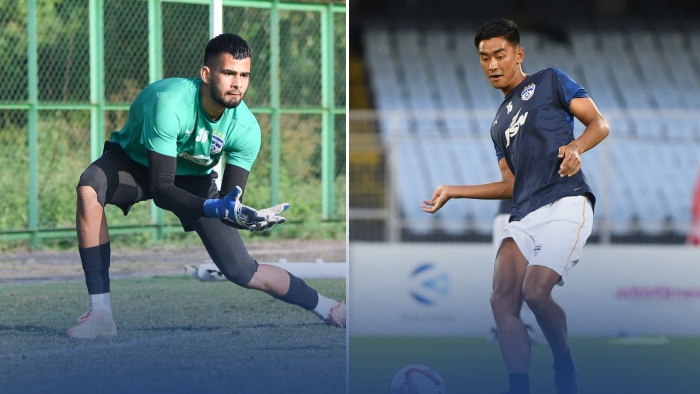 Bengaluru FC, on Tuesday, announced that goalkeeper Lara Sharma and defender Wungngayam Muirang signed contract extensions, as the Blues continue a rebuild with youngsters at the helm. While Muirang put pen to paper to a fresh three-year-deal that keeps him at Bengaluru till the end of the 2024-25 season, Lara added another three years to an existing contract that still has a year left on it.

“Retaining our core of youngsters and building the team around them is what we have set out to do, and the extension and new deal for Lara and Muirang is part of that plan. Both these youngsters have shown on more than one occasion, what they are capable of. More importantly, they have tremendous potential that we – with Simon at the helm – want to help them reach,” said Mandar Tamhane, CEO, Bengaluru FC.

Lara had his moment toward the end of the ISL season after first-choice Gurpreet Singh missed out on the last five games with illness. And the 22-year-old put in more than a few impressive performances, including one where he was named man-of-the-match.

Our young goalkeeper puts pen to paper on a three-year-deal which will see him guard the Blues’ goal till the end of the 2025-26 campaign. 💥#WeAreBFC #Lara2026 pic.twitter.com/jOSAzOUvkw

“Everyone at the club has been so supportive –  from the players to the staff and fans, I’ve felt at home here. I’ve learned a lot at this club and it wasn’t hard for me to make this decision,” said Lara, after signing his contract extension with the Blues.

The TATA Football Academy graduate joined the Blues in 2020 from ATK Mohun Bagan and made his debut in the Durand Cup before getting his chance in the 2021-22 ISL season. The goalkeeper stood out in the BFC’s semifinal run in the Durand Cup, and carried that form to the senior team for the League season.

The Blues’ versatile defender commits his future to the club until the end of the 2024-25 season. 💥#WeAreBFC #Muirang2025 pic.twitter.com/WCQBthYon4

Now twenty-three, Muirang started his career with the FC Pune City Reserves in the I-League 2nd Division before moving to Gokulam Kerala for two seasons. The versatile defender then joined the Blues in 2020 and made his debut against Kerala Blasters in the 2020-21 season after coming off the bench late in the game. He went on to start his first game in the same season against Jamshedpur FC before putting in some big performances in the Durand Cup.

“My aim is to play more games and win trophies for this club. I look forward to working with the new manager and learning new things. I’m very happy to extend my stay here and play in front of our fans,” said Muirang.