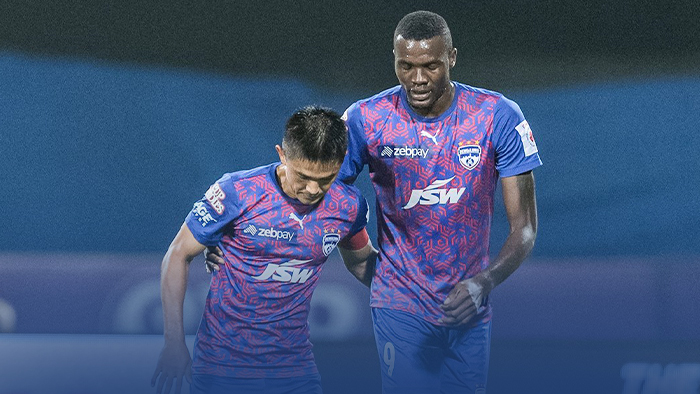 Sunil Chhetri’s 11-game barren run of goals in the Hero Indian Super League (ISL) came to an end as he salvaged a point for Bengaluru FC in a 1-1 draw with FC Goa at the Athletic Stadium in Bambolim. Scoring his 48th Hero ISL goal, the India captain equalled the League’s all-time record goalscorer, Ferran Corominas’ tally.

Dylan Fox (41’) scored his first goal for FC Goa with a header until Sunil Chhetri (61’) equalised with his first of the campaign. The result keeps both Bengaluru FC and FC Goa in eighth and ninth place respectively in the points table with 14 points each.

The match began at a frantic pace which led to an early injury for Glan Martins who had to be replaced by Princeton Rebello inside the first 12 minutes. Roshan Naorem and Iman Basafa had their shots go narrowly off-target shortly after in a positive start for the Blues. The Iranian midfielder along with Danish Farooq also received a yellow card each in the first half for poor challenges.

Both teams exchanged blows for the remainder of the first half but did not create any meaningful scoring chances until Dylan Fox broke the deadlock. Jorge Ortiz was allowed space on the left flank to deliver a pinpoint cross. It found the centre-back on the far-post, and all Fox had to do was get his head on the ball to score his first goal of the season. Thanks to the goal, the Gaurs went into the halftime break with a slender advantage.

The second half saw BFC start purposefully but the Gaurs were resolute in defence and kept their attackers silent. Cleiton Silva came close to scoring the equaliser with a volley moments before the hour mark but his attempt went narrowly past the right side of the goal. However, it took a moment of brilliance from Sunil Chhetri who finally found the back of the net this season to bring the game level. He scored with a sublime header from Prince Ibara’s cross.

Two more BFC players in Roshan and Prince received yellows in the second half for mistimed challenges. Brandon Fernandes also made his first appearance of the campaign for FCG from the bench. Chhetri came close to scoring the winner deep into added time after his left-footed curling shot hit the crossbar. There was nothing to separate the sides at the final whistle and the points were shared as a result.

Bengaluru FC is up against Chennaiyin FC in their next at the Athletic Stadium on Wednesday whereas FC Goa will clash with Owen Coyle’s Jamshedpur FC at the same venue on Friday.