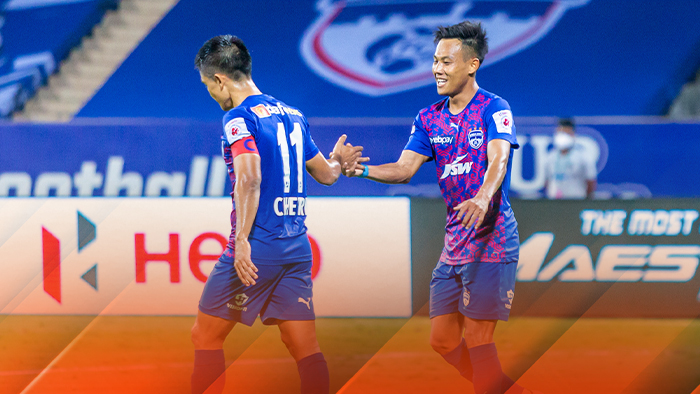 It was blue all the way on Republic Day as Bengaluru FC rode on Udanta Singh’s brace on either side of halftime to crush Chennaiyin FC‘s hopes of going top of the table with a 3-0 win in the Hero Indian Super League on Wednesday.

Iman Basafa opened the floodgates for Bengaluru who were missing first-choice goalkeeper Gurpreet Singh Sandhu with Lara Sharma filling in for the star shot-stopper. Basafa converted from the spot in the 12th minute before Udanta made it 2-0 in the 42nd minute. The pacy winger struck in the 52nd minute too to take the game away from Chennaiyin and ensure his side moved to sixth in the table with 17 points from 13 games.

Chennaiyin remained fifth having 18 points from 13 matches, but a victory would have taken them top of the tree with Hyderabad FC having 20 points from 12 outings.

It was a frantic few minutes at the Athletic Stadium in Bambolim after the Southern Derby got underway as both teams seemed desperate to nose ahead. Chennaiyin had a big chance in their bid to take the early lead but Lukasz Gikiewicz’s shot from close ricocheted off the bar and went out.

Two minutes later, Bengaluru were awarded a penalty after Sunil Chhetri was fouled inside the area. Basafa stepped up to take the spot-kick and made no mistake, sending the keeper the wrong with a delectable penalty that thundered into the top left corner.

Chennaiyin tried hard to draw level with Germanpreet Singh and Vladimir Koman trying their luck but to no avail as both the efforts went wide.

Just before halftime, Bengaluru double their advantage. Chhetri was at the heart of the move and the iconic Indian captain showed composure and unselfishness of the highest order as he dummied his hit, cut into his left and put the ball on a plate for Udanta to score.

After the break, Bengaluru started bossing the game and got their reward very soon, Udanta doubling his tally with a cool finish rounding Debjit Majumder in Chennaiyin goal after snatching the ball from Mohd Sajid Dhot with Slavko Damjanovic failing to avert the danger too. It was Blues from there on as Prince Ibara and Rohit Kumar seeing their efforts bear no fruit.

Chennaiyin lacked attacking with up-front until  Lallianzuala Chhangte forced Lara into a superb save to sum up a good day in office for Bengaluru.