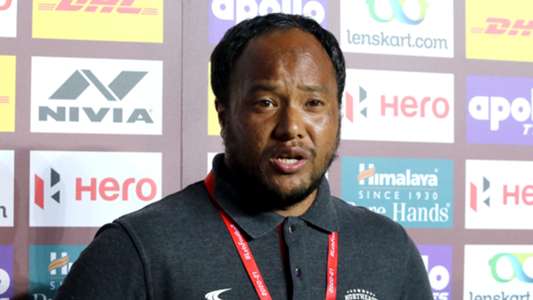 Northeast United FC is all set to play their next game against Hyderabad FC, assistant coach Alison Kharsyntiew and Imran Khan attended a press conference before the game and shed some light on various questions.

One of the biggest concerns for the highlanders was their goal conversion from their chances, addressing this the coach said, “Last game we played very well in the first half, the boys were confident and flexible in attack but the only thing is that we are not clinical in the final 3rd, we have to work that in the training and implement it on the ground but I am confident that the players are mentally very strong and they are ready to bounce back in the next game.”

On talking about conceding more goals and not keeping clean sheets he said, “The main thing is that in defence we need to be disciplined and follow the principles, if we follow that we will concede fewer goals, apart from that we need good concentration and we should be focussed from the first minute to the 90 minutes.”

Coach also shed light on Subhashish’s injury, “Well, Subhashish is fine now and he is back in training.”

Imran responded to a question on how he saw Hyderabad as a team, his response was, “They are a good team, we are prepared for the next match, we have confidence and hope to get the 3 points.”

Imran had sustained an injury before the season and he is still recovering from that, about his recovery and fitness he conveyed that, “The coach and the medical staff everyone has worked hard for me and I am thankful to them, now I am fit and can play the full 90 minutes.”

The highlanders last played on 10th December and haven’t got enough recovery period before the match against Hyderabad FC, the coach shared his thoughts on this, “We played on 10th and we play again tomorrow and then again after 3 days, so yes the recovery period is less especially dor the players who played more number of matches, but we have some other players, so whoever is fresh, mentally prepared and is 100% fit we will play them and yes they are ready to play.”

Federico Gallego had suffered a knee injury which resulted in him missing the rest of the matches for this season, on talking about his replacement the coach’s response was, “It’s still in process if there is any news the club will inform will social media.”

The club has had a rough start to the tournament with just 1 win and a draw until now, Imran spoke in this regard, “Honestly, I don’t think about the past, am focussing on the next game and we are working hard and are ready for next game, let’s see what happens and we will work hard for the 3 points.”

Northeast United FC seem to be not yet gelled as a team this season and the coach had said, “In the last match first half we played confidently and kept the ball very well the only place where we lacked was in the final 3rd so we have to display and maintain that performance we showed against Odisha FC in the first half.”

The Nizams are a team known for their brilliant football and the way they keep the ball to themselves, “Hyderabad are a very organised team and are very flexible in attack and have talented youngsters who perform very well so tomorrow we have to be very disciplined tactically and we need to give our best effort and be more determined and courageous for the 3 points.”

In the match against Odisha FC, they lost in the dying moments of the game after playing good football, on responding to how the mood in the dressing room was Imran quoted, “Last match we created chances but couldn’t covert them, the loss was unlucky, we prepare for the next game and will try and win it.”