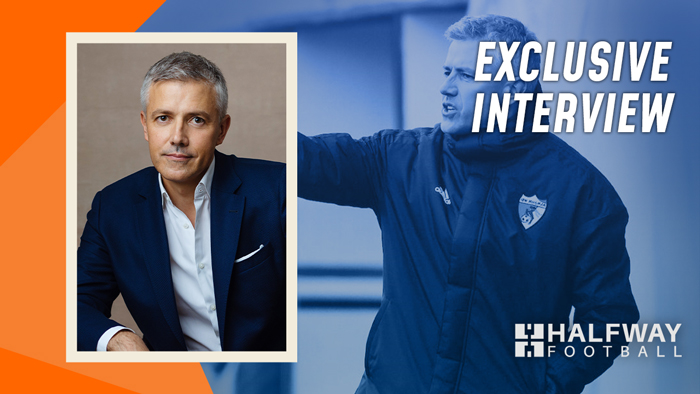 In the eighth edition of the Indian Super League, fans have seen the arrival of a couple of new managers including the Serbian tactician Ivan Vukomanovic, who took the team to the finals in his very first season.

Ivan was given a fresh three-year deal after the club’s stellar performance. It was for the first time in the history of the Kochi-based franchise that they retained the services of a coach who has managed the club for an entire season.

Dejan Čelar, another Serbian manager who played in the same league that Ivan played in the 90s was keen to follow Indian Super League after his countrymen have took charge of the Tuskers.

Halfway Football recently had an exclusive chat with the 47-year-old Serb who has managed some clubs in Serbia. Having vast experience as a player, Dejan also worked as a scout and an expert analyst. In the interaction, he talked about Ivan Vukomanovic, Indian Football and Indian Super League, Asian leagues, and much more.

Ivan Vukomanovic, a former colleague and compatriot, is the coach of Kerala Blasters FC in the ISL. In his first season in India he led his club to the finals. What do you think about that?

I think that Ivan did a phenomenal job with Kerala Blasters FC in his first year at ISL. They reached the finals and played an effective football. With a little luck, they were able to win the playoffs. The influence that Ivan made with his staff on the team is obvious, they played with a lot of passion in the finals and there was a good chemistry between the coach and the team. I respect Ivan very much as a person and a coach, after all, he is highly esteemed in Serbian football circles as one of the most talented young coaches.

I have followed several Asian leagues because I have friends who work there. With Ivan’s arrival in Kerala, I also followed this ISL season. The first impression I got, watching the ISL matches, was positive. It was obvious that the ISL organizers took care of all the details, and the broadcast of the matches both visually and audibly, was not below the level of European football leagues. I saw potential in the players in detail, good motor skills, good ball control, first touch etc. What is immediately noticeable is the lower level of tactical discipline, I mean, the mobility of the lines, compactness, reactions to lost balls, positioning, covering the opponents, etc. There is a difference in relation to European football, but it is a process and Indian football has the opportunity to advance in this segment in the future.

Before becoming a coach, you were a scout for Chelsea and Villarreal. What qualities do you believe a scout looks for in a player?

Other big clubs also used the services of the agency I worked for. Scouting in football is complex, there are many parameters that are monitored. I followed the young U17 and U19 players. I watched hundreds of games and trainings during a year and spent a lot of time in the car crossing Europe and writing reports every night in hotels. We had unique software, all the scouts brought in the players they followed. For each player, we gave grades for motor skills, endurance, ball control, understanding of the game, psychological characteristics, etc. We also followed certain standards for each position in the team. I used to watch a player in multiple games and training sessions and make predictions about how a player would fit into a particular team taking into account the style, system, philosophy and ambience within the club.

What are your thoughts on the Indian Super League? How long do you think it’ll take to reach top-flight standards?

What I liked about ISL is the visual and auditory standard during the broadcast of matches. The ambiance of the matches, the design of the jerseys, the commercials around the field, the pitches, the television commentators, the symbols of the clubs all look and sound good. The best teams from India will have the opportunity to compare with the best teams from other countries in the Asian Cups. Currently, teams from Japan, Korea, China, UAE have an advantage over teams from India. I do not believe that the Japanese, Koreans, Chinese or Arabs are more talented than the Indians in football. It is necessary for clubs (franchises) to establish good systems in scouting, talent development and top training methodology of senior teams. I believe that the influence of the coaches is crucial. You can always find and pay quality footballers in the market. The point is to get existing players through the training process and raise their performance. The process has its limits, but I have witnessed some amazing transformations of the teams and players I have coached.

As a former scout, do you see any unpolished gems among the young Indian Footballers? Is there anyone who particularly interested you?

Old habits die hard. Watching the game, I often remember the number on the jersey of an interesting player and subsequently look for details about him. What I saw, without listing names, is that there are talented players in the ISL.

How important was the experience as a player in your development as a coach?

It helps a lot. You know, football is really not what you see on the TV or from the stands at the stadium – on the field everything is different. The angle of view and the speed at which things happen in front of you is different. Empathy between coaches and players is important, and my experience as a professional footballer helps me to fully experience the challenges that the players I train find themselves in during a training session or a match. Especially today, when football has become very demanding in terms of physical effort and speed of decision making.

What role does an analyst play in a team? What are the most significant considerations while analysing a team?

I could talk to you about this topic for days. I will try to simplify. A serious coach has a developed Game Model (attack, defense and transition mechanisms). According to what happens to one team during the match, we recognize 10 basic Standard Situations + Set Plays. For each Standard Situation we have a few Principles (rules) of how we want the players to react, and we have Training Exercises to support those principles. These three segments make up our Game Model – the framework within which we communicate, train, play matches, analyze our team and opponents. The analysis of our team must be directly related to the Principles (there are up to 40 of them) and how much they are applied by the players in trainings and matches. Also, the analysis of the opponent is in direct relation to our Game Model (matching). From the above, it is clear that the analyst must be familiar with our Game Model down to the smallest detail, in order to be able to recognize it in training and match recordings.

What are your thoughts on the current market scenario in football? Do you think some players are hyped up beyond their worth and there is an unnecessary inflation taking place?

We are talking about a global football market that has an approximate value of 2 billion dollars. Players and coaches are the main protagonists and as the industry grows, so does their value and demand for them. Economically, there are three reasons for hiring players or coaches in football. The impact it will make on your team’s results, marketing opportunities and resale and eventual earnings. Are some numbers too high? I think some really are. At the same time, I believe that even in the biggest transfers on the market, clubs had their interest.

Would you be interested in making a move to India in the future? Have you ever received any offers from India?

I spent the previous year in Belgrade for family reasons, I only accepted to follow the UEFA Europa League as an expert analyst on Arena Sport TV and to be a lecturer on the UEFA License at the FSS Coaching School. Since August, I am free again for a coaching job. I had no contact with Indian clubs. The most important thing for me, is that the club that hires me witnesses a positive impact on how team plays and the results it achives. That is the fundation on wich I build relationships. I love challenges. I believe that football in India has great potential and a huge space for progress.

Lastly, which all teams do you think will do well in the upcoming World Cup in Qatar?

Of course, I would like it to be Serbia. We have a group of very talented footballers who play in the biggest European clubs and a coach who loves open, attacking football. The strength of our national team was shown in the qualifications for Qatar when we finished as the first team in the group ahead of Portugal. In addition to my subjective fan predictions, objectively, France has a very good team as well as Argentina. What is certain is that due to the date of the World Cup, we will follow the historical football season 2022/23.