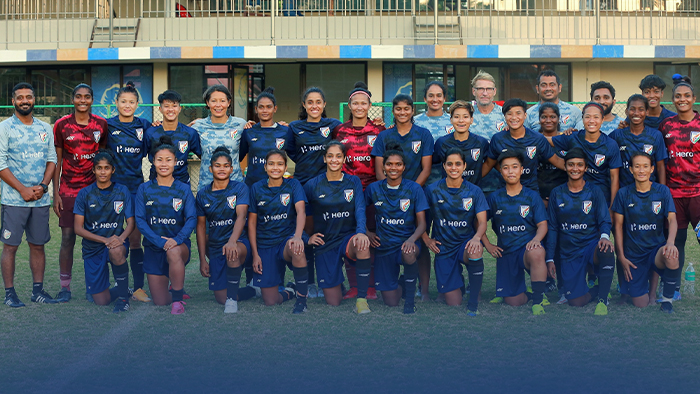 After camping in Kochi for more than a month since returning from their tour of Brazil, the Indian Women’s Team has now shifted base to Mumbai, where they are set to compete in the AFC Women’s Asian Cup India 2022.

Looking forward to the tournament ahead, head coach Thomas Dennerby believes that once the Blue Tigresses land in Mumbai, all focus will be on the Asian Cup.

“This is the moment we’ve been preparing for over the past six months. We’ve had over 200 sessions, a number of matches against quality opponents across four countries, and now it’s time to implement all the things that we have been working on,” said Dennerby.

The 62-year-old Swede, who had also previously coached the Swedish and the Nigerian National Teams, revealed that a pep-talk with the players before departure to Mumbai, has helped put everyone in the correct mindset.

“We had a small meet with the players and we explained to them how important the coming few weeks are in their lives. I think this has really struck a few chords, and you can now see the determination in their eyes,” he revealed.

The Indian squad is a rather young one with as many as 15 players under the age of 25, with a collective average age of 23.13. The youngest members of the squad are four girls who have come in from the U-19 squad – Shilky Hemam, Priyangka Devi, Sumati Kumari, and Mariyammal Balamurugan.

Winger Sumati believes that the togetherness and bonding between the players have grown over the last six months, with the more experienced bunch helping the younger ones in various aspects.

“I think we have all grown together as a squad. We had started with our camp in Jharkhand, and also played a number of matches abroad against some tough opponents, before moving base to Kerala. We’ve all been training with one goal in mind, and the entire squad is now focused on the job ahead,” said Sumati.

“We have had a lot of help from the more experienced players, who have shown us the way in a lot of things, especially in various off-the-field aspects that could later help us,” she added.

India begin their campaign at the DY Patil Stadium in Navi Mumbai against IR Iran on January 20, before facing Chinese Taipei (January 23) at the same venue. For their third match of Group A, the Blue Tigresses will move to Mumbai Football Arena in Mumbai, where they square off against China PR. The matches will be broadcast live on Eurosport and streamed live on Jio TV.