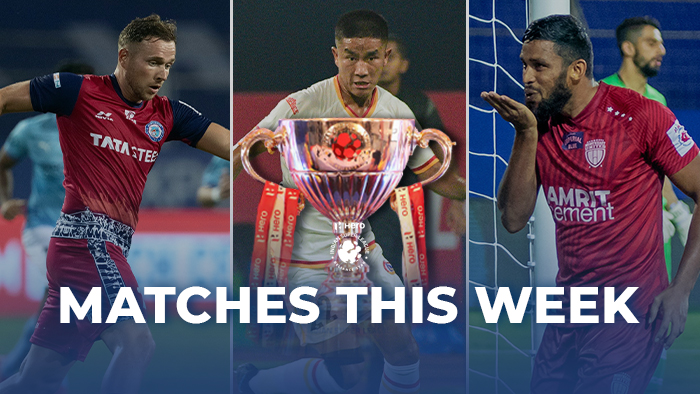 Let’s have a look at the Indian Super League matches which will take place in the first week of this year.

The opening matchday of the league will have a doubleheader which means there will be two doubleheaders in the opening week of the year!

Kerala Blasters and FC Goa will kick off Indian Football’s new year when they will face each other at the Tilak Maidan. FC Goa always had an upper hand in head-to-head battles. The team also has great goalscoring records against the Blasters. However, things are a bit different this time. Ivan Vukomanovic’s Blasters are heading into the new year as a team in form. They are currently high on spirits while FC Goa has struggled so far.

Kerala Blasters are just three points off from the top spot and they have a good chance to go to the top spot if they win by over a 3 goal margin. They will also look to improvise those pasts in their favour by defeating the struggling FC Goa.

The second game of the doubleheader will take between two of the teams managed by Owen Coyle at some point of time. Jamshedpur FC is currently on the playoff spot. Just like Kerala Blasters, Jamshedpur FC will find themselves in the top spot if they win the game against Chennaiyin FC by over a 3 goal margin.

Chennaiyin FC is currently suffering from the same misery which they faced last season. They aren’t able to convert chances and are the only team with less than 10 goals scored in the tournament so far. However, they have signed Valskis to cover up those miseries. He won’t be available for the game against the team he played for just a few days ago, due to quarantine rules.

Mumbai City FC is on top of the table as they continued from where they left the last season. Odisha FC is now seeing themselves in the seventh position after a high-flying opening two games. In the 8 games both teams have played, Mumbai City FC has scored 20 goals while Odisha FC has conceded 20. Which is the highest in both respects. At this rate, Odisha FC will end up conceding even more goals than last season. So this game is surely going to be a tough game for them.

SC East Bengal is still winless. In the 8 matches so far, SC East Bengal has got 4 draws, 4 defeats and 4 points. They are at the bottom of the table and are four points off from the next spot. Even if they win against seventh-placed Bengaluru FC, they will be at the same place. But with more to show.

Manuel Diaz and the club parted ways and the former head coach Mario Rivera is the new head coach of the team. Fans will be hoping to see something which rejoices them a bit. As the ISL stint of the club has been in a miserable state.

Hyderabad ended the year with an emphatic 6-1 victory against Odisha FC. Both Hyderabad FC and ATK Mohun Bagan are separated by each point. Hyderabad FC is in the second while ATK Mohun Bagan is in third place. If Mumbai City FC fails to beat Odisha FC, both the teams will have a chance to go top of the table if they win. Hoping for an interesting battle.

Another game of the week for both the teams. As it stands, it will be a game against the table-toppers and table floorers. On paper, it should be another easy game for the Islanders but it’s up to SC East Bengal to prove everyone wrong.

These two teams will face each other in the first game of the second doubleheader of the week. It will take place in the Fatorda Stadium. Odisha FC has never managed to salvage a single point against green and maroon jersey in the ISL. Odisha FC may look to defy the odds to win against ATK Mohun Bagan. Or at least take home a point for the record books.

The week’s closing action will see FC Goa and Chennaiyin FC go against each other. Both of them are currently outside the playoff spots. Whenever these two teams face each other, an exciting encounter is on the cards. We should hope the same this time.