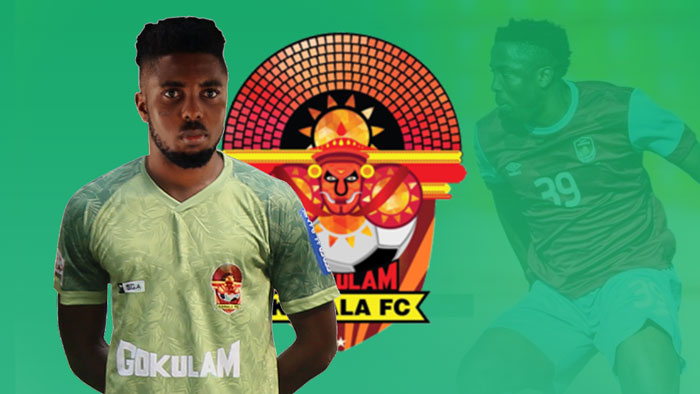 A prolific striker, he has represented the Nigerian national team and has been playing for top-flight clubs in countries such as Nigeria, Morocco, Egypt, Bahrain, and Iraq.

Elvis started his football journey at the age of seven and after his academy years, he joined Abia Warriors FC. He helped the club to get into the Nigerian Premier League.

He spent four years in the club, scoring 58 goals in 71 matches. He also represented the Nigerian National team in 2016 in the African Nations Championship and scored a hat-trick against Niger.

Elvis is a quick and agile right-footed striker who has good space and finishing ability.

We are presenting our new addition Chisom Elvis Chikatara to Malabar ⚽🚀

The Nigerian, who has played for the Nigerian national team, is on a mission to land more titles. Let's welcome the striker ⚡⚡#GKFC #Malabarians #ILeague #durandcup2021 pic.twitter.com/dvdwBwgmwa

“I am glad to join Indian champions Gokulam Kerala FC. I am ambitious like the club and I would like to make a mark in India. I will help the club conquer new heights,” said Elvis Chikatara.

“In all I-League, it will be difficult to find a player like this. It is not easy to play for the Nigerian national team. He has scored several goals for them. He is very technically sound and has good pace. He has proved his worth in all the clubs he has played. I hope he can give international quality to the team,” said Vincenzo Alberto Annese, the head coach of Gokulam Kerala FC.

“We welcome Elvis Chikatara. He has a proven track record and we believe he can flourish in India. We wish him all the best for the season,” said VC Praveen, the president of Gokulam Kerala FC.

Elvis Chikatara is expected to reach India by next week and join the squad before the Durand Cup.